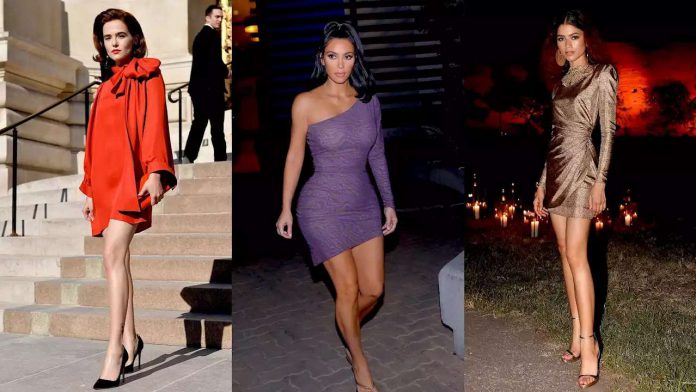 Stars looked to fashion’s past and its future.

Pinterest
As the world’s most stylish descended on Paris last week to view the fall haute couture offerings they did so in looks that spoke to fashion’s past and also to its future. Two who went retro? Zoey Deutch, who channeled both Jean Shrimpton and Jackie Kennedy Onassis in a crimson mini-dress and bouffant for Armani Prive; Naomi Campbell, who offered a riff on Seventies disco wrangler in a wide brim hat and geometric prints head to toe at Valentino. Other star attendees were resolutely right now in their choices. Wearing Vetements’ collaboration with Paris Hilton, Céline Dion continued to have more fun with fashion than anyone else at the collections. The deconstructed blazer and t-shirt combo was cool enough but Dion took her sartorial irony next level by pairing it with the Titanic inspired heart of the ocean necklace.

Her heart will go on…in Vetements.
Elsewhere, on streets and red carpets, summer style had a certain brash sizzle. In London to pick up Best Female Artist at the O2 Silver Clef Awards 2019 Dua Lipachose a white suit direct from Jacquemus’ Spring 2020 collection. Oversized yet archly tailored, the look was Miami Vice meets modern pop princess, especially when worn over a micro bralette. Meanwhile, in Los Angeles, Kim Kardashian West was busy championing Maisie Wilen, her husband’s fellow Chicago-an, design protégée and purveyor of colorful, skintight dresses. En route to a dinner date on Tuesday KKW, in a lavender asymmetrical number, turned the sidewalk into her own personal catwalk.

Abbey Road Studios Doc If These Walls Could Sing’ In Works...