Home Woman These 2-Ingredient Cashews Are the Best Bar Snack 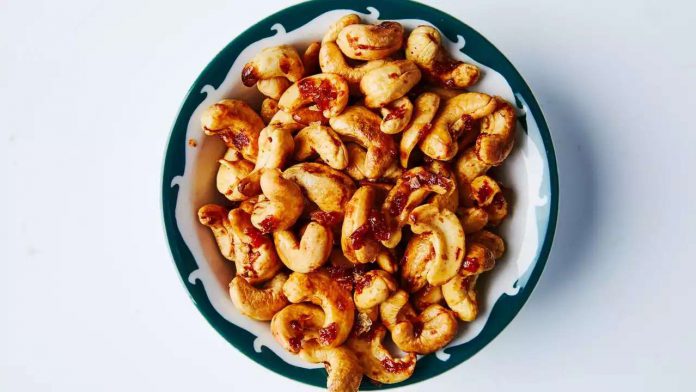 A bar snack that you can make in five minutes, with only two ingredients. Magic.

ever) and stir occasionally, while the nuts toast. Part of the reason these are so great is that you’re toasting already roasted nuts. Double flavor. Double crunch. Cook for about 3—5 minutes.
Put the cashews into a bowl and toss with
flaky sea salt
to season. Let the nuts cool for a bit. They’re tasty now, but they’re even better once everything gets back to room temperature. You’ll have the perfect trifecta of salty, spicy (but not overwhelmingly so), and fatty in an endlessly snack-able form.

If eating these things involved Atreyu, Bastian, and a luckdragon named Falkor, I’d call them
The Neverending Story
. They don’t, so I’ll just call them fantastic.
Double the recipe. Triple the recipe. Quadruple the recipe. Whatever. It doesn’t even matter. However many cashews you make, it will never be enough. But that’s fine, because a five-minute cook time and minimal ingredient list mean there’s always time for more.
Those cacio e pepe chips are pretty easy too.
Explore Bon Appétit

Cardi B Leads An Army Of Nude Dancers Then Kills Them...

I tried the best-selling mascara in the US and Europe and...