Home Woman ‘David Crosby Remember My Name’ Is a Bittersweet Insightful Look at a... 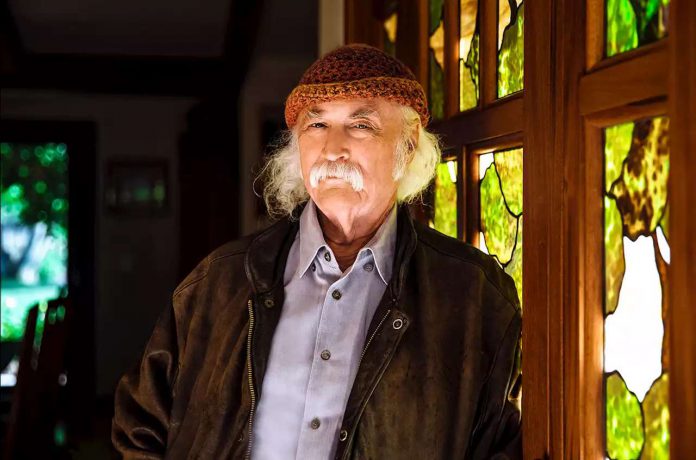 The end isn’t terribly far away for David Crosby, and he knows it. “I’m close,” the now-77-year-old folk singer admits at the outset of ‘Remember My Name’. “Music is the only thing I have to offer.”

, and he knows it. “I’m close,” the now-77-year-old folk singer admits at the outset of
Remember My Name
. “Music is the only thing I have to offer.”
Not true. The time is also right for him to reflect on all the highs and lows in his colorful life with a wry commentary. Crosby is a two-time inductee of the Rock and Roll Hall of Fame, a charter member of the 1960s California rock scene and a husband of 32 years to his devoted wife, Jan. But regrets? He has more than a few. And that’s why his documentary serves as a difficult but poignant ode to a man fading out and not at all pleased about it.
In many ways, the white-haired hippie is a walking miracle. That’s not just because he still tours the country despite his type-2 diabetes, a Hepatitis C diagnosis due to a weak liver, and the maximum-allotted eight stents in his heart. For all his heavy drug use, Crosby’s mind is blessedly sharp and unfiltered: With onetime journalist and
Remember My Name
a fascinating and funny subject
. On The Doors frontman Jim Morrison: “What a dork.” On his behavior around estranged friends and bandmates Stephen Stills, Graham Nash and Neil Young: “When I get mad. . . I’m an instant asshole.” His rationale for turning to heroin is as eye-opening as it is tragic.
Of course you can trace his incorrigible attitude to his childhood. Some of the tropes will seem familiar to anyone who’s ever watched one
Behind the Music
episode: Crosby was born in 1941 to a warm, civic-minded mother and a distant, Oscar-winning cinematographer father who never said “I love you.” He was drawn to jazz and the Everly Brothers at an early age. Director Adam Eaton and Crowe skip through these wonder years and stop the needle when Crosby starts making jangly, chart-topping rock with The Byrds. That’s a fresh-faced Dave crouched in a corner behind John Lennon during a Beatles press conference in 1965. The fame and ensuing hallucinogen experimentations led to doomed affairs with many women, including a torturous relationship with iconic singer-songwriter Joni Mitchell. He learned the romance was over via a new song she wrote and strummed in his presence. It was about her heartbreak.
Crosby spins many of these anecdotes to Crowe while traveling from the Sunset Strip to Laurel Canyon in an SUV. Explicitly retracing his steps, he reminisces about his friendship with Mama Cass Elliot of The Mamas and the Papas, and sheepishly confesses that he and other musicians uprooted to the canyon for the practical purpose of getting above the Los Angeles smog.

He’s guilt-ridden over the friends and loves he treated badly, many of who fell into his web of addiction. In the most poignant moment, he lingers on the pavement of the unassuming green-painted ranch where CSN was formed. The cozy spot also served as the inspiration for the 1970 hit “Our House.” Now he’s an outsider looking in the golden-hued windows.
Indeed, it’s telling that nearly all of Crosby’s peers appear in individual archival audio and video footage to comment on him. (Photographer Henry Diltz, who memorably shot Crosby with a
stuffed American flag gun
pointed at his temple, is a rare exception.) As of 2000, Young wants nothing to do with him because of a misunderstanding gone awry. Nash matter-of-factly tells Paul Shaffer in a 2018 interview that his 40-year friendship with Crosby is kaput for good. Stills is never heard from. Crosby reveals with palpable twinges of hurt that none of his former bandmates want to talk to him, and the feelings will never change. The unraveling is real, as evidenced by CSN’s wince-inducing final performance: A rendition of “Silent Night” at the 2015 White House Christmas Tree Lighting Ceremony so ear-splitting that the Obamas squirm in the front row. The contrast with their free-wheeling 1969 Woodstock concert is startling.
Most music docs — especially with living, breathing subjects — twist themselves into pretzels trying for that pat ending.
See, there was pain galore, but I’m doing great and excited about the future!
But Crosby’s relationship carnage is littered throughout
Remember My Name
, giving it an underlying sadness. He’s bothered by the present, haunted by the past. He doesn’t have an answer as to why he made it to old age and many of his contemporaries did not. “Time is the final currency,” he muses. “How do you spend it?” So he grinds it out on the road with backup musicians half his age, tweets like a millennial and recently completed a new album. Cocaine has been replaced by prescription medication that he must take in nondescript hotel rooms. End or no, you have to admire that Crosby’s still determined to teach the children well.
David Crosby: Remember My Name
opens in theaters on Wednesday, July 17.

Why exactly are the Jonas brot