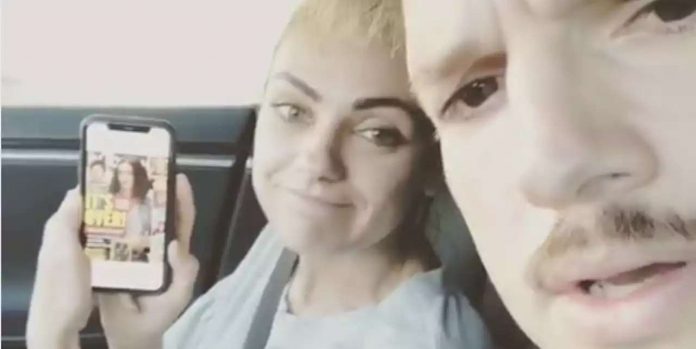 ‘You felt suffocated by me? Oh, I was just so overbearing, wasn’t I?’

Allen Berezovsky
Getty Images
When a false tabloid story hits, some celebrities choose to ignore it. Others issue denials through their reps, or arrange a paparazzi moment that will show they’re still in love or not pregnant. Mila Kunis and Ashton Kutcher tried something a little different: They personally responded to
InTouch
‘s cover story that they broke up in a video, going through every detail of the story with mock shock and a lot of sarcasm.
Kutcher tagged
InTouch
in his caption of the video, writing,”
I guess it’s over @intouchweekly have fun selling magazines this week. Maybe next week my wife will be having twins. For the third time. But who’s counting.
In the video, they went back and forth over the story, with Kunis holding up a screenshot of it on her phone.

“Babe, what’s happening? What’s going on?” Kutcher started.
“It’s over between us,” Kunis responded.
“It’s over between us?” Kutcher incredulously asked.
“Yeah,” Kunis replied.
“Oh my god, what are we going to do?” Kutcher asked.
“I felt suffocated,” Kunis stated, deadpan.
“You felt suffocated by me? Oh, I was just so overbearing, wasn’t I?” Kutcher asked.
“Also…”
“What else is going on?” Kutcher interjected.
“I took the kids,” Kunis said flatly.
“Oh, you took the kids. I don’t get the kids anymore?” Kutcher asked.
“Well, you had a very dark secret exposed,” Kunis said.
“Oh my gosh, what was the dark secret?”
“I don’t know. I only have this photo,” Kunis said, holding up the screenshot of the cover on her phone.
“Must have been really dark,” Kutcher finished.

Trump Tells Putin Not to Meddle in 2020 Wink Wink

Lana Condor Finn Wolfhard And All The Can’t-Miss Looks At The...

The Other Crisis Millions Worldwide Have Lost Access to Abortion and...