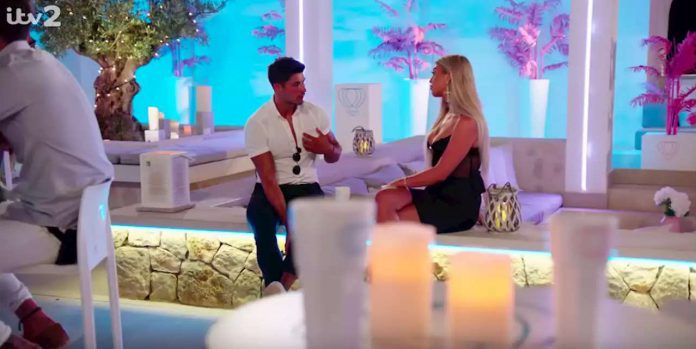 Belle Hassan from Love Island’s dad has spoken out about her argument with Anton Danyluk, branding him ‘disrespectful’ to his daughter.

Anton Danyluk
for”disrespecting” his daughter.
The pair had a blazing row over the ‘Snog, Marry, Pie’ challenge, which saw Belle accusing Anton of”embarrassing her” and”mugging her off”.
Love Island’s
Belle Hassan and Anton Danyluk might have made up after their argument in the villa, but one person who isn’t so keen to forgive and forget is her dad, Tamer Hassan.
During the contestants’ club party on Sunday [14 July], Belle and Anton had a blazing row after he had kissed Anton Vakili in the ‘Snog, Marry, Pie’ challenge, and gave his number to a shop assistant.
At the time, Belle had fumed,”I don’t care if it [was] a challenge. I don’t find that funny. You don’t think you’ve done anything wrong? Then there’s a problem. All you care about is what other people think of you. It’s getting tedious now. You’ve mugged me off. You’ve embarrassed me. You’ve made me feel like shit – I’ve cried in front of you, and you’ve not even said, ‘Are you OK?'”
ITV2
Later, the pair kissed and made up.

Anton apologised for upsetting her in the challenge, Belle apologised for being hot-heated, and the whole issue was put to bed. Right?
Er, wrong actually, because Belle’s father isn’t so keen on forgiving and forgetting. Speaking to
The Sun
, he said the scenes had made him an ‘unhappy dad’, and he was not happy with how things were playing out.
“On the outside Belle would not tolerate that behaviour,” he commented.”If Anton genuinely has feeling for my daughter, he’s going to have to work harder to win her back, to gain her trust.”
He continued,”Anton is 100% wrong for kissing Anna it was disrespectful and disloyal, two of Belle’s biggest hates. I am now doubting Anton’s feelings for Belle and that makes me an unhappy dad!”
ITV2
Fellow Islander Molly-Mae Hague was also suspicious of the quick turnaround, branding Anton and Belle making up just hours after their dramatic argument a”red flag”. Are people doubting whether Belle and Anton will go the distance?
Related Story