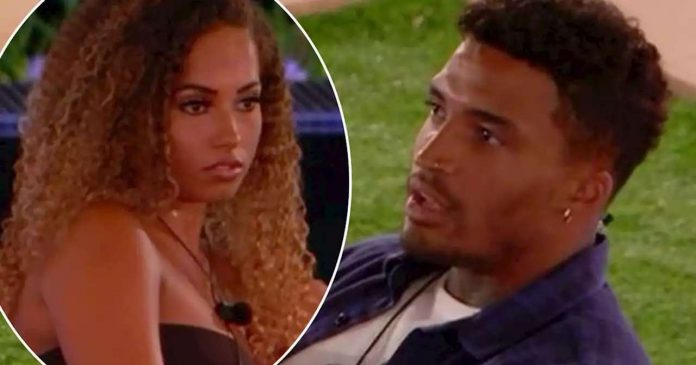 Love Island fans have demanded that Michael is kicked off the show.

Angry Love Island fans have called for Michael Griffiths to be kicked off the show over his treatment of Amber Gill.
The 27 year old ordered his former flame to “sit down” as they chatted about their rocky history after Joanna’s exit from the show.
Viewers were left shocked at the order, after Maura Higgins branded Michael “rude”.
Michael walked over to Amber and angrily said: “Amber, sit down for us. Sit down.”
Irish beauty Maura is then heard saying: “Did she just let him talk to her like that? Sit down? That was really rude.”
Jake Quickenden wrote: “Mate I’m sorry… Michael saying ‘sit down’ was bang out I was expecting him to say ‘roll over’ afterwards so rude… you can get your point across wand not be a d**k about it!” [sic]
Another viewer added: “I’m still not over Michael telling Amber to sit down like she’s a f*****g dog.

A third added: “Absolutely disgusting! How can Michael speak to Amber like that?”
Amber appeared to be fuming over Michael’s comment as she headed to seek comfort with the girls after her discussion with him.
She raged: ”He’s just f*****g odd. He comes to me and says ‘Sit down.'”
To which Maura responded: “Sit down? Don’t tell me to sit down, who the f**k do you think you’re talking to?”
Amber replied: “As if it’s me who brought someone back from Casa Amor. All I wanted was to be friends with him.”
Love Island continues at 9pm on ITV2.

Everything Taylor Swift Announced Including Her New Song ‘The Archer ‘...