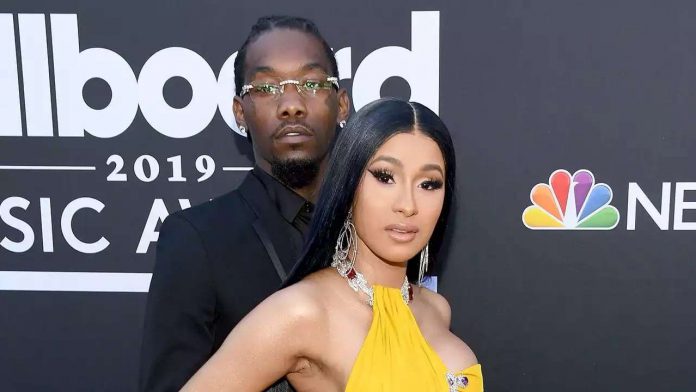 , and while the Migos rapper was in Los Angeles on the big day, on the opposite coast from his wife and baby, he said that they have big plans for the weekend.
Offset served as a presenter at
this year’s ESPY Awards
alongside fellow Migos rappers Quavo and Takeoff, and all three joined ET’s Lauren Zima backstage after being on stage.
The 27-year-old rapper — born Kiari Kendrell Cephus — revealed that he was planning to head back to be with his family as soon as the show was over, to gear up for the upcoming b-day bash.
“I’m flying out there to New York right after I leave here,” he revealed.”We got a big party this weekend, on Saturday.”
While he didn’t really elaborate on what fans might be able to expect for his little girl’s first birthday festivities, Offset teased,”You just gotta see, it’s gonna be everywhere.

It’s gonna be a big, big, big, big, big party, though.”
“It’s our first child together, so it’s a big celebration,” added Offset, who is also the father of sons Jordan and Kody and daughter Kalea from earlier relationships.
On Tuesday night, Offset took to Instagram to share
heartwarming birthday tributes to his little girl,
in commemoration of the special day.
Offset posted a beaming snapshot of his infant daughter laying in a bassinet while rocking a tutu over a custom-made onsie that read,”50% Kiari, 50% Cardi, 100% Kulture.”
“YOU ARE SO PERFECT LOVE YOU KK,” the proud dad captioned the sweet pic.”HAPPY 1st BDAY I LOVE YOU.”

Clap For Carers is ending tonight