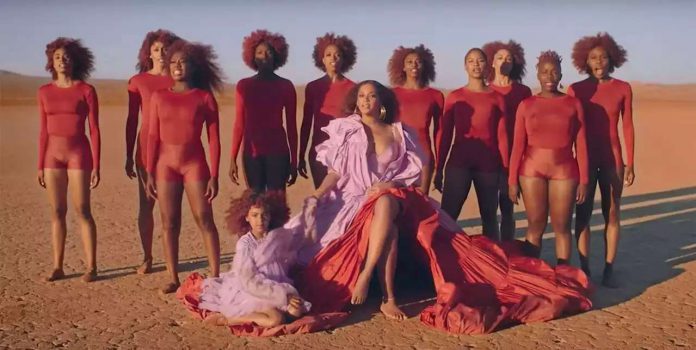 to ABC last night. where she spoke about
The Lion King
, the original cartoon’s impact on her, and the album she curated for the new version of the film. She also released the music video for the new song she recorded for the adaptation:”Spirit.” There’s a lot to take in: incredible dancing, breathtaking scenery, an entire rainbow’s worth of outfits that Bey wears, and Beyoncé’s seven-year-old daughter Blue Ivy Carter, who is a scene-stealer in her own right whenever she’s alongside her mother.
YouTube
The video has over 1 million views already.
In her interview with ABC, Beyoncé spoke about the vision behind the video.
”
The concept of the video is to show how God is the painter, and natural beauty in nature needs no art direction,” she said.

It’s the beauty of color, the beauty of melanin, the beauty of tradition.”
She added,”It was important that we weren’t just inspired by Africa but that we actually included and learned from the motherland.”
She also spoke about how much being able to pass down
The Lion King
to her family and children Blue and her younger twin siblings Rumi and Sir meant to her.”Being a mother, my family is my biggest priority,” Bey said.”It’s not many films that the parents can go and feel the way I feel about I feel about
The Lion King
and…pass that legacy on to their kids.”
“I grew up watching

Hypnotherapy Is the Next Big Wellness Trend Here’s What Experts Say...