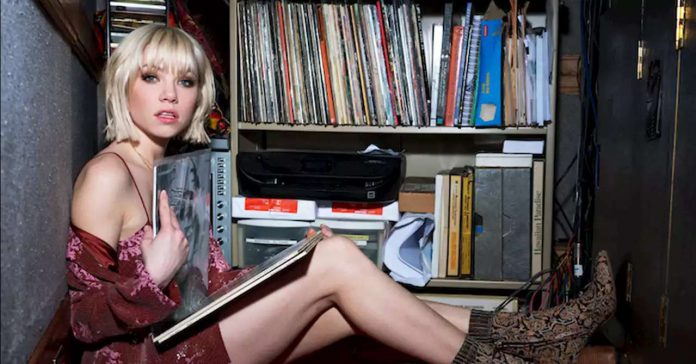 ‘Call Me Maybe’ was just the beginning…

If you still only know Carly Rae Jepsen from 2012’s “Call Me Maybe,” it’s time to play catch-up because I’m here to inform you that she has been making some of the best pop music we’ve been blessed with in years. For real, can we talk about “Run Away With Me,” a song that will straight-up melt your body to mush? And what about the most joyful pop track ever, “Cut To The Feeling”? Or if you’re in a sexier mood, “No Drug Like Me” is seriously the hottest bedroom song of the century. Basically, if you haven’t already accepted Jepsen as a musical goddess, it’s time to wake up and worship her as the pop genius she is.
Following her breakout hit “Call Me Maybe” and album Kiss, which did OK on the charts but wasn’t exactly a critical smash, we endured a three-year Carly hiatus. But dang, when this Canadian singer came back from that break, she came back with 2015’s Emotion and 2016’s Emotion: Side B. Both albums were critically lauded, landing on multiple “best of the year” lists. Still, despite this acclaim, they slipped under the mainstream radar—none of the tracks made it onto the Billboard Hot 100. But if you haven’t heard them, you’re missing out. Like, really missing out.
I was (and still am) pulling for Jepsen’s fanbase to grow. After her Emotion albums, I thought it couldn’t get any better music-wise—and yet it did. Her latest album, Dedicated, was released in May to similarly good press. It’s sexier and more mature than her earlier work, but it continues with what’s basically her MO: bringing romance and yearning to life in the catchiest, dreamiest ways. Case in point: her recent single “Too Much.”

Next up for the pop queen is the Canadian stretch of The Dedicated Tour, which will include two stops in her home province of British Columbia. She also collaborated with up-and-coming musician Jordan Alexander on a Pride remix of Dedicated’s “Feels Right.” The two were paired as mentor and mentee by Bud Light and performed together during the Pride parade in Toronto.
I was lucky enough to talk to Jepsen about Dedicated, the beauty of pop and why she finds romance so fascinating. Read her words as gospel. (But, honestly, the most important thing is that you listen to Dedicated and understand why she’s the most underrated pop star ever.)
Basically all your music is about love in one way or another. What keeps you coming back to that theme? I think it’s just a natural instinct. I’ve gone into sessions before when I’ve been exploring subjects that aren’t necessarily about love, and I ended up twisting back to it. I think I have a fascination with the subject. Even today when I meet strangers, I find myself almost past the point of polite introduction, like “So what’s your love life like? What’s going on with you?”
I find it amazing how we all feel like we have unique situations and experiences and yet how connected they all are and how familiar they are to so many people. And I think that that makes you feel less lonely when things are tough or understood when you have a high. And I love that connection, I guess.
What has been your most challenging relationship experience, and how did it end up manifesting in your music? In my last relationship, one of the hardest elements was that I was breaking up with one of my best friends. He was my creative collaborator, he was my one true confidante, and yet romantically things weren’t right. And we both knew it, but neither of us wanted to make any moves about it. We were in Sweden when our relationship really came to a halt. I went into the studio that day and started the track “For Sure.”

It was just that cycle of rethinking things: “I’ve been thinking we were over, I’ve been thinking, got to know for sure.” I just wanted to, like, go on this sort of drone-y feeling that you get into when you’re questioning something.

And he showed up to drop off a coffee, and he was so amicable about it. He came in with his arms swinging high in the air, and he was like, “I love the beat of this one!” And then he took in the words and went from doing a happy dance to a sad dance. We both kind of giggled at the profound weirdness of our situation.
What’s the appeal of really, really good pop music? Like, what can pop do that other genres can’t? The thing I love about pop is that it packs a punch. Every word is vital. We don’t have a lot of them to get to the point of what we’re trying to say. To do that with heart is trickier than one might expect, and I have definitely spent my life’s work trying to figure out how best to do that.
It’s simple yet deep at the same time, and the melodies are there to become your own, so they have to be memorable—they have to be something that we can latch onto. And I love that about pop. And I love that the world is starting to see it as something to be taken seriously.
Unlike most pop stars, you don’t usually have big choreographed sets and you stick more to pared-down performances. But lately, you’ve got this chill dance going on when you perform “Too Much.” Can we expect more choreo on this tour? I don’t dance, and when I do it’s always a bad idea. Subtler movements are what I play at, and when I’m actually having the epitome of a great time onstage, I’ve just locked into myself and I can’t control my body. But I’ve learned to be confident in that.
I don’t compare myself to other pop stars because I think we’re a little bit more focused on just the music, so [on The Dedicated Tour] we’ve got lights and videos and other things that are purposefully kind of pared down.
[We have] two incredible backup singers and the same band that I’ve had for almost, my God, some of them going back 10 years now. We just know each other so well and want it to be a joyful experience for everyone who comes. We are having the time of our lives, and we hope that’s contagious.
In your i-D profile, you explain that you’re learning what it means to be dedicated to somebody in a different way. What did you mean by that? It’s a word that I’m wrestling with versus totally, head-on understanding it. It’s a thing I’ve been exploring in my own personal life—what it is to be dedicated to someone and what it takes and when to say yes and when to say no. It’s something I’m still curious about and definitely allowed myself to think about when writing all these songs.
You wrote literally hundreds of songs for this album but chose just a fraction to be released. Will we ever hear the rest? Are we getting a Dedicated: Side B? I have every intention of sharing more. I don’t know if all 100 or 200 are coming out, but you’ll definitely get more of the work that I’ve been saving over these past few years. I would be heartbroken if it was only the 15 I could share.
If you could describe Dedicated in one word, what would it be? I would say…“longing.”
And if there were just one song on Dedicated that would convince someone to listen to the rest of the album, which would it be? When I’m asked about my favourite song, it’s tricky for me. But your question is more in-depth because it’s like, what is the definition of the album?
I guess the heart of this album for me was maybe the opening track, “Julien.” A little bit understated and a little bit of that fantastical side of never-ending love and having somebody on the line ’til the end, which I kind of pine for.

Grab Paper Plates Socks or Sliders and Glide Along to These...