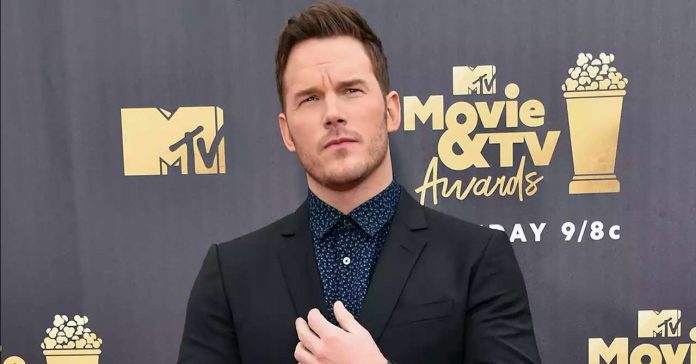 Well everyone, the debate is finally over. For years the internet has been plagued by the ultimate celebrity horse race: Who is the best Chris in Hollywood? It’s a competitive category, with Chris Hemsworth, Chris Pine and Chris Evans all in the running. But, we can finally take one Chris out of the race entirely—because Chris Pratt is 100 percent the worst.
The actor is being criticized on social media after being photographed on July 15 wearing a T-shirt with the Gadsden flag while out for a day of exercise with his wife, Katherine Scwharzenegger. For those unfamiliar with the flag (a.k.a. non-Americans or non-history buffs), the coiled rattlesnake over the phrase “Don’t Tread on Me” was created by Christopher Gadsden—a general in the Continental Army—and came to prominence during the American Revolutionary War of the 1770s (again, history buffs).
pic.twitter.com/u9vDDar24G
— hunter harris (@hunteryharris) July 15, 2019

Why are people so up-in-arms about an ugly design of a snake that an old man probably created by candlelight, you ask? Great question! The uproar comes from the fact that over the years the flag has been adopted by far right political groups, becoming a symbol of conservatism and, more recently, associated with white supremacists (although the jury is out on whether or not this is true). So yeah, not so innocent. Also, we can bet he did *not* pick that up at The Gap.
This isn’t the first time Pratt has made a questionable decision—or comment—and, it’s starting to become a trend. Here, all the ways Chris Pratt is problematic.
*That* T-Shirt Aside from being just an ugly shirt, it’s important to note that the Gadsden flag is a controversial symbol. Debates around its meaning have been ongoing, with The New Yorker reporting that the flag has held several meanings since its inception. Through the years, it has picked up various connotations, from a sign of nationalism to “strident anti-government sentiment” that was directed with particular hate towards Barack Obama, the first African-American President, during his presidency. According to a 2016 article in the New Yorker, the symbol is now “sometimes interpreted to convey racially-tinged messages in some contexts,” and has been equated by some with the confederate flag, which has long been seen as a symbol of violence and white supremacy. So, it’s complicated. But a lot of people associate the flag with racism. And there have been several reported workplace instances of Black employees requesting the flag be removed from their workplaces.
If we’re giving Pratt the benefit of the doubt, and that’s pretty gracious, maybe he just doesn’t know what the flag signals. Maybe it was laundry day at the Schwarzenegger-Pratt household and he grabbed something off the top of the laundry pile and he doesn’t even know where it came from. To that we say: Educate yourself. Because wearing something like the Gadsden flag—even if unintentionally so—in our current political climate, could be dangerous.
In the United States, the number of hate crimes increased by 17 percent between 2016 and 2017, according to reports by the FBI. And in Canada, racism is getting worse; with police-reported hate crime on a steady rise over the past few years, according to data from Statistics Canada. In 2017 there were 2,073 reported incidents of hate crimes, up from 1,295 in 2014, 1,362 in 2015 and 1,409 in 2016. The biggest increase were crimes related to race, ethnicity and religion.
Promoting images like the one emblazoned on Pratt’s T-shirt, and in essence promoting the co-opted ideology behind it, only further adds fuel and support to those ideals and the people who hold them and *do* see the flag as a relic of a greater (ie: whiter) past.
And tbh, with Pratt’s history of conservative comments regarding gun ownership, praise for law enforcement and his ambiguous politics, this shirt doesn’t seem *quite* so happenstance—which makes it a seriously big problem. Because that means it’s reflective of his politics and makes his politics pretty questionable.
I like him, but all these small things about his politics makes me wonder when he’ll say something transphobic, tank his career, and do the full heel-turn into a Fox commentator https://t.co/Emfzd02GmK
— Tim Byrnes (@timbyrnes89) July 16, 2019

His problematic Church Like many in the city of Angels, Pratt is a proud member of the hip, Hollywood church set. Church and Christianity are having a moment among celebs, and at the centre of this moment are funky churches led by men in expensive Balenciaga sneakers. Pratt is a member of Zoe Church (pronounced “zo-AY,” “like be-yon-SAY” for those wondering), an institution known for its celebrity parishioners like Justin Bieber and Selena Gomez and its non-inclusive ideology.
On February 8, actor Ellen Page waded in to the subject of Pratt’s faith after his appearance on The Late Show with Stephen Colbert, where Pratt talked about his 21-day, bible-inspired fast (more on that later) and his faith. “Oh. K. Um. But his church is infamously anti LGBTQ so maybe address that too?” Page tweeted, alongside a Hollywood Reporter article about Pratt’s appearance.
Oh.

K. Um. But his church is infamously anti lgbtq so maybe address that too? https://t.co/meg8m69FeF
— Ellen Page (@EllenPage) February 8, 2019

A week later, Pratt responded, taking to his Instagram story to refute Page’s claims (without naming her directly), writing: “Nothing could be further from the truth. I go to a church that opens their doors to absolutely everyone.” Pratt also said that his church community offered love and support through his divorce from ex-wife Anna Faris, something Pratt said he had “seen them do for others on countless occasions regardless of sexual orientation, race or gender.”
Chris Pratt just posted this on his instagram story addressing his church. pic.twitter.com/eiEg4ICnXi
— uncle jen saw ffh (@tardypartypeter) February 11, 2019

And while that’s a nice idea in theory, it may not actually be super true, because the church’s politics are pretty questionable when it comes to the LGBTQ community—especially for a church who claims to accept all. Chad Veach, the founder and pastor, has been hella cagey when it comes to answering questions about topics like abortion and the LGBTQ community. In March 2018 he told The New York Times he was “a Bible guy,” when asked about abortion rights. And in 2017, Veach was the executive producer for a film about people “who have struggled with ‘sexual brokenness,’” which included “same-sex attraction,” according to Refinery29.
The church is also heavily associated with fellow megachurch Hillsong, whose leader Brian Houston declared in an August 2015 blog post:”We do not affirm a gay lifestyle.”
The Biblical Diet
Look, we’re not here to chastise people for their faith. Whether you’re religious, non-religious, in-between, someone who attends church every week or maybe just sees God as a once-and-a-while relationship—that’s completely your prerogative. But there’s being religious and then there’s taking it to most—and unhealthy—extremes, and encouraging others to do the same.
In January, Pratt announced to his Instagram followers that he was taking part in “The Daniel Fast,” which involves 21 days of prayer and fasting to draw them closer to God. The fast is inspired by the biblical Daniel, who went 21 days eating only vegetables and water. According to a Daniel Fast website, the fast is “similar to a vegan diet with additional restrictions.” So, it’s a lot. And it’s also not healthy.
According to Ohio-based dietician Liz Weinandy, who spoke with Men’s Health in January, the diet is lacking “all kinds of nutrients,” and could lead to dangerous deficiencies—especially due to the fast’s lengthy timeline.
We’re prone to calling out women like the KarJenner’s and Cardi B for hawking unhealthy and problematic crash diets (and rightfully so), so why not Pratt as well?
His comments on not being “seen” in Hollywood In a May 2017 interview with Men’s Journal, Pratt told the magazine he felt like an outsider in Hollywood; in part because he didn’t see stories like his on-screen. “I don’t see personal stories that necessarily resonate with me, because they’re not my stories,” Pratt said. “I think there’s room for me to tell mine, and probably an audience that would be hungry for them. The voice of the average, blue-collar American isn’t necessarily represented in Hollywood.”
…um, what?

Here’s a quick list of just some films depicting the blue-collar, white American experience: Manchester by the Sea, Hacksaw Ridge , American Sniper, Silver Linings Playbook, An American Woman, North Country, The Fighter, The Town, Joy and pretty much anything Jennifer Lawrence is in.
Not sure, seems like quite a few.
Not only are Pratt’s comments pretty shortsighted, considering that a lack of diversity and representation on-screen is still a huge issue—especially for marginalized communities who still face whitewashing in cinema or backlash for colour-blind casting. But, as Nylon writer Kristin Iversen pointed out in an April 2017 article, in talking about his search for an “average, blue-collar American,” Pratt is “centering himself—a white man—as being an ‘average American.’”
Which speaks volumes.
So yeah, we’re *officially* scratching Pratt off our list of all things Chris. And, may we suggest a replacement?

The un-problematic, women-loving heartthrob Chris Messina, FYI.
Related: Remembering Karl Lagerfeld, a Problematic Genius
Can We Just Acknowledge that Anna Faris’s Support of Chris Pratt Is *Not* Normal?
Who Is Katherine Schwarzenegger & Is She Dating Chris Pratt?!