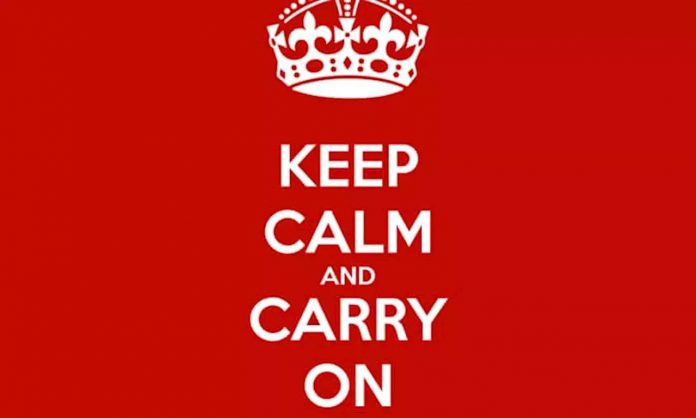 The above phrase which became a calling card for the British people during World War II can provide relevance and importance in our current age of instant news, constant news, Facebook and Twitter …

Beth
The above phrase which became a calling card for the British people during World War II can provide relevance and importance in our current age of instant news, constant news, Facebook and Twitter and the inevitable presence of THE PHONE.
There were days in the past, when you could sit outside in the grass and listen to the wind in the trees, the birds chattering–even your children quarreling–yet still remain calm. Why? Because the moments of your day were not cluttered with constant NEWS–which in translation can be warnings about THE PRESENT, THE PAST and always THE FUTURE. It was as if you could enclose yourself in a BLOCK OF TIME that was filled with peace. I can’t think of a better way to say it.
REMEMBERING
There were days in my past, when I could live in the now and everything else melted away. Even though my husband was between jobs–not his choice–I could still find that block of sunshine on the family room floor where my daughters and I could build a tower with blocks or decide to make some pudding. Our biggest challenge? Chocolate or butterscotch.
REALITY
YES! I know it sounds simple. It was. There were BIG SPACES OF TIME in our lives when our brains did not have to consider PROBLEMS, FEAR, FLOODS, DEATH. And there is something to be said for that old line: Innocence is bliss.
And I don’t mean turning away from reality. I don’t mean denying that children on the border are being separated from their parents. I need to know these things so I have the free will to be angry, to say NO–that’s not how we should live.
Even during World War II when my mother walked out into her backyard and hung her laundry on the line, looked up at the sky, lived a life so far apart from that of the people in Europe that you might say she was on another planet–she still knew some of what was going on. The words on the CHICAGO TRIBUNE headline did not totally go away. But maybe my mother and others who were worried about their loved ones, who were relying on rations to buy certain things–maybe THE SPACE between news and non-news allowed breathing, allowed some calm. And maybe not. If your husband was a flier in WWII or in combat in Viet Nam, maybe you didn’t sleep at night. Maybe every minute of your day was one of conflict and deep emotion.
EXTRAORDINARY RELATIONSHIPS: A NEW WAY OT THINKING ABOUT HUMAN INTERACTIONS
In the above titled book, Roberta M. Gilbert writes about how to deal with your emotions.
In order to observe emotional process, it is necessary to stay emotionally calm. Watching emotional process requires the detached focus of a scientist; the moment one’s emotions intensify, one sees less clearly.
Yes. That’s how it feels sometimes, especially in the first seconds of hearing bad news.

Emotions flow through your brain, your body. You have trouble breathing. It could even be the fight or flight response created by adrenaline.
Gilbert wants us to consider: What do you say when a friend reveals there is emotional trauma going on in her family? Do you react in the same way if it’s your sister who stops in and tells you that she is leaving her husband and children? Probably not. What do you say that might change the complexion of your day but certainly has torn up his or her life?
THE POWER OF EMOTION
Gilbert reminds us (and this is so true about families) that emotional reactivity is infectious. If it is your sister and she reveals this explosive news at a family gathering–suddenly the room is roiling with emotion. What do you do? What do you say? Gilbert’s advice: work toward self-discipline. Try not to FEED THE SITUATION with THE FIRE OF YOUR EMOTIONS. It boils down to that old advice: stay calm.
Sometimes we try and are successful. Other times we blurt out advice and make the situation worse. I have learned when the emotion arises from the lives of friends or family members that are not my nuclear family, and when I am not directly approached and asked for my opinion, to listen and say little.
THAT BLOCK OF QUIET
Even while sitting in the same room where emotion is building and people are jumping in with advice (think: a family oriented film where the voices rise and rise and tears are building, escaping) I search for that block of quiet. I say nothing or very little, unless I am directly asked. When I do this, I feel I am helping lower the thermometer of anxiety and emotion. It’s not my place to escalate things unless asked.
Roberta Gilbert reminds us: The solution to most problems, especially when one is stuck, has as much to do with how one goes about the problem-solving process as it does with the actual content of the problem. READ THAT AGAIN. THINK ABOUT IT.
A TAKE-AWAY
Gilbert relied on the work of psychiatrist Murray Bowen when writing her book. Bowen dedicated his life to the “human cause” and produced a new theory of human behavior, the family systems theory. The following is a statement made by a client who used the Bowen family systems theory to solve a relationship problem.
Working toward my own emotional calm and intellectual objectivity enables me to think more clearly and speak and act more constructively, while providing a tangible contribution to the emotional climate of my relationships.
I guess one could just say simplistically: KEEP CALM and then CARRY ON.
Photo: Thanks to the Guardian Newspaper
Share this:

For More Details : Fountain Of 30

40 Classic Movies You Need to Watch in Your Lifetime

Trump Insists He Only Went to the White House Bunker amid...

“Record of Youth’ Is a Career Drama for Stans Too