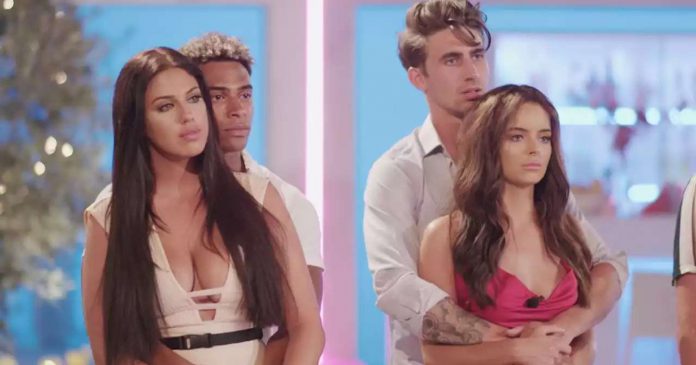 A shock recoupling is set to stir things up in the villa.

Love Island is in for an explosive episode after announcing there will be a recoupling on Thursday.
The girls will have the power as they decide who they want to couple up with, leaving Amber Gill torn between new boy Greg and former flame Michael.
The shake-up will send shockwaves through the villa, with someone now set to be left single.
In Thursday’s episode Maura announces to the group that a recoupling will take place after receiving a text.
“Islanders. Tonight, there will be a recoupling in which the girls will choose which boy they want to couple up with. #manofthemoment,” she reads aloud.
The two new girls, Harley and India, will decide who they want to pair up with after entering the villa earlier this week alongside Greg, who has caught the eye of Amber.
Amber will have a hard time picking between the new boy, who left her smitten after their date in the Hideaway, or Michael, who will reveal he still has feelings for her.

Read More Love Island 2019 – the latest Ovie and Chris are also fighting over new girl India, who will have to decide which boy she wants to couple up with.
On Thursday’s show, India tells Ovie: “It’s nice to come in here and feel like you get on with someone.
“Obviously, you’re lovely to look at but I know that if I need someone to talk to about anything, you’re the person I feel on a level with. We’re on the same page.”
However, later on in the episode, Chris also tells the model: “I like you. I don’t know if you guessed that?”
Love Island continues at 9pm on ITV2.
Love Island 2019 contestant’s amazing tan transformations after a month inside the villa
View gallery

Look at my clogs I’ve started a trend