Home Woman Simon Pegg’s trainer reveals how he got drastic new body and if... 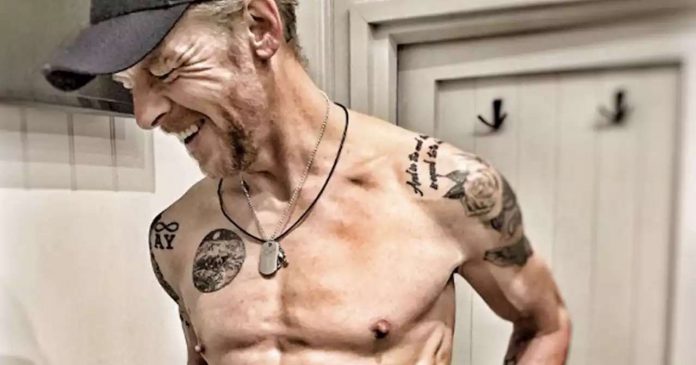 Shaun of the Dead star Simon Pegg shocked the internet when he unveiled his totally transformed torso for his upcoming film Inheritance, where Pegg plays a man who has been trapped in a basement for 30 years.
The 49 year old star showed off a six pack and incredibly lean chest, an image at odds with his usual everyman physique.
Pegg’s new body is courtesy of personal trainer Nick Lower, who worked with the actor of six months to help him achieve his weight goals.
Pegg kept up a gruelling regime of cardio, trail runs, circuit and strength training in order to get down to a shocking single figure body fat percentage.
Simon Pegg dropped from 78kg to 69kg and shed 4% of his body fat, reaching a low of 8%. The figures are astonishing, but Pegg’s trainer maintains that they didn’t do anything “magical”.
Nick Lower, who works at Rebourne Fitness and Nutrition in Hertfordshire, told Metro.co.uk : “We kept his calories in check and he trained very hard. Simon had one rest day, then he would do our sessions and extra cardio.
“We didn’t do anything magical or out of the ordinary – we made sure Simon had the right balance of macro nutrients and we trained a lot – a mixture of strength training and circuit training and some cardio added on to make sure we achieved that calorie deficit.
“Essentially, it’s got to be a mix of strength training. Strength circuits work really well, where you hit as many muscle groups as you can in one session, keeping it high intensity, then move onto 10-15 minutes of cardio or ropes.
“But then we trained so much we could spread it out a bit – we would maybe do core and legs on one day, and move onto other sections for two days – but Simon had the luxury of time for training.

He did a lot of cardio on top of that as well.”
However, Nick stresses that Pegg’s body shape and the gruelling regime he stuck to is ultimately unsustainable.
He said: “It’s not maintainable and it’s very hard. It’s going to take a lot of training. Simon may have had one day rest, but he worked hard every day and he was strict, and that’s how he got those results.
“But it’s a short-term thing, you do not want to do that long-term.”
Nick did not reveal details of Pegg’s diet during his weight loss endeavour, merely stating that he stuck to a ‘sound nutrition plan’.
For those looking to lose weight, tone up or even emulate Simon Pegg’s new physique, Nick has some advice.
Read More Food stories “I would start with the basics. Before you start looking at what to eat and what reps to do, look at your own habits. If you’re someone that doesn’t eat breakfast or you eat quickly or you’re eating a lot of sugary, high-fat food, I would look at that first and get into the habit of eating better and going to the gym.
“Without your foundation, it doesn’t matter what program you try – you won’t fix it long-term. If you go for a short-term fix, you’re going to get a short-term fail.
“Play the long game if you can, make small changes, and that will create the biggest long-term change.”
Pegg’s body transformation might be drastic, but according to Nick, there are small changes we can all make to look and feel better, and improve our overall health.

No ‘Barbie feet’ is not a dis

Lukoff most recently served as