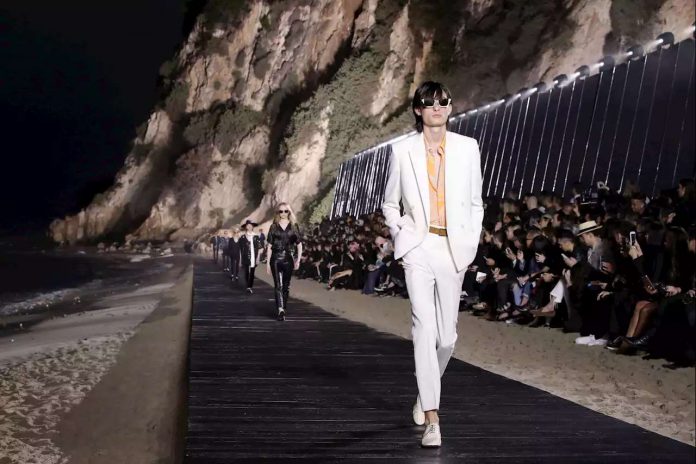 Anthony Vaccarello’s ‘70s rock-influenced S/S 2020 menswear collection for Saint Laurent took place on a placid beach in Malibu and featured glitter suits, skintight pants and plenty of men in eyeliner. It also, according to a recent report, violated a host of local environmental regulations in place to preserve the integrity of Malibu’s fragile beach ecosystem. Matt Meyerhoff, a spokesman for Malibu City Hall, told
Vogue Business
, “They built a boardwalk all the way across the beach. They shored it up with plastic sandbags, which are illegal in the city. People were outraged.

Apparently, local government had denied Saint Laurent an event permit to host their show at idyllic hidden beach Paradise Cove, but decided to evade the decision by applying for a filming permit from a city contractor instead. Malibu also has a local “dark sky” ordinance banning bright lights in the evening so residents can see the stars and wildlife aren’t confused by artificial light, which Saint Lauren also ignored in favour erecting towering lights. Such controversy highlights the need for fashion brands to be accountable for the impact they have on local environments. (

Have We Hit Peak Podcast?

What You Need to Know About Cannabis Legalization 2 0

I Tried the Muted Nail Trend and Now ‘Nude’ Nails are...