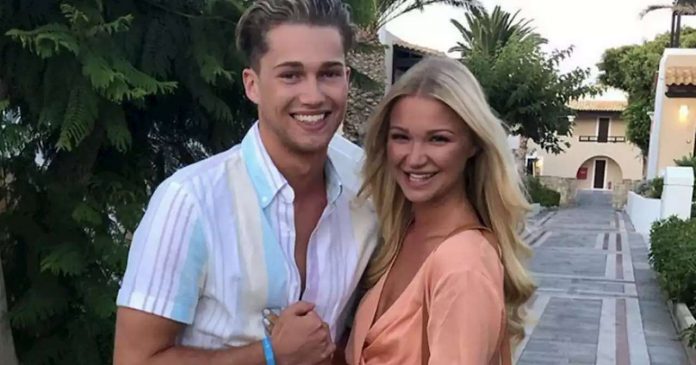 Strictly Come Dancing star AJ Pritchard has finally gone public with his girlfriend Abbie Quinnen, after opening up about her in an exclusive interview.
The 24 year old professional dancer had previously spoke to OK! magazine about fellow performer Abbie, but had yet to share any images of the pair online.
But now, the duo have taken to Instagram to share a gorgeous photograph of themselves holding hands – appearing to officially confirm their romance.
“Feeling HAPPY, AJ – whose brother Curtis Pritchard is currently flirting up a storm in Love Island with Maura Higgins – captioned the shot, while Abbie added to her own page: “Making memories.”
Fans were quick to comment on the sweet snap, with one writing: “Perfect pair!”
“You guys are the cutest couple! So happy to see this!” another wrote, while a third added: “Omg you are so suited!”
AJ recently opened up about his love life to OK! magazine.

“I’m currently seeing another dancer [Abbie Quinnen] but it’s very early days,” he said. “I’m working constantly so I don’t get to see her too often, but I’m very happy.”
Love Island 2019: before they were famous View gallery A source recently spoke out about AJ’s romance with the dancer, revealing the couple have been “dating for a while now”.
The insider told The Sun: “AJ fell for Abbie the moment he saw her and they’ve been dating for a while now.
“It’s very early days between them but their friends think they make a perfect pairing.
“They’ve been on a number of low key dates and were seen being very tactile with each other at a couple of parties during the tour.”

10 Fashion Insiders on the Most Comfortable Flats They Love to...