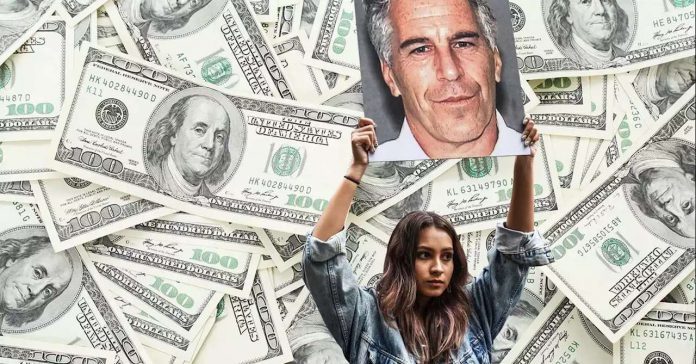 The alleged sex offender is just another example of how money can make you untouchable, says American writer Alicia Lutes.

You may also like
#MeToo should be about calling out men’s bad behaviour – not assuaging their guilt
This time, however, things were different: the uproar was loud and indignant. Epstein is symbolic of a huge problem, one that is currently terrorizing the world from the White House, so it’s no surprise he became the metaphorical apple of the FBI’s eye. He was arrested on 6 July 2019, in New Jersey, coming off his private plane on a return flight from
Paris
(where he owns a home). Epstein and his rich friends would frequently travel the world with young girls at their beck and call on a plane they called the Lolita Express, where the girls were (allegedly) raped and prostituted out, sometimes even groomed to recruit other victims later on. He and his friends did this for decades, shielded by his incredibly powerful friends and co-conspirators who benefitted from his predation.
Jeffrey Epstein
When he was arrested on state charges in Florida in 2007, his friendships and wealth garnered him a joke of a
non-prosecution agreement
— one that kept his victims in the dark, another thing against the law — where he went to “jail” for a few weeks, but was allowed to leave for 12 hours a day, six days a week, to “go to work,” a phrase for which there are not enough eyerolls in the world. Earlier this month, he was federally indicted and charged with paying dozens (if not hundreds) or underage girls for sex acts they engaged in with him, and other men, in his many homes across the United States and on ‘Epstein Island’, aka Little Saint James in the Caribbean that’s owned by the millionaire.
Rich people get away with murder (literally and figuratively speaking), all the time, but this is not an admonishment of all rich people. Obviously, it goes without saying, not all rich people are bad. It is, however, an admonishment of a system many rich people hate to acknowledge is real because it gives them an incredible advantage: their money removes them from the metaphorical food chain of consequences for your actions.
Once you’re rich, you can literally do anything, because losing money hurts less than learning actual lessons. Having money is the real freedom, not the creation of equality via laws. And once the richer miscreants are ensconced in the system, they can ignore the ramifications of their own bad behaviors, because money makes so many people untouchable. And wielding it over the less fortunate is an incredibly effective motivator for silence. It’s no coincidence that so many victims or witnesses go silent or disappear time and time again.
Don’t miss out: sign up to the
Stylist Daily
email for a curated edit of brilliant content every day
Enter your email address
Let’s go!

Wealthy individuals no longer have to consider the good and bad of their actions, because money solves so many problems, so very quickly, and without much effort at all. So without thinking, it becomes a normal thing to use incredible wealth to bend the world to one’s will. Why learn a hard, painful lesson, when you could just throw money at the problem? That’s the real American dream. People don’t want freedom or free will, they want the power and insulation money provides, because it takes too much work to upend such an unjust system.
Jeffrey Epstein and Donald Trump in 1997. President Trump has said “I don’t know about it” in regards to the allegations against Epstein. White House advisor Kellyanne Conway added that “like everyone else” Trump believes the allegations against Epstein are “unconscionable and obviously criminal”.
In so many ways, this power is exactly what we’re fighting in the case for impeaching Donald Trump. Here is a man who was given so much wealth that even when he lost a billion dollars of it being bad at his alleged job, he still figured out a way to get out from underneath it all, thanks to his business managers and financial advisors. Money talks the only language to which our criminal justice system actually listens: because ultimately they, too, need money in order to prosecute the bad guys.

In so many ways, the bad behaviors of these men aren’t the worst of it, it’s the security and enabling environment that money provides.
As a hedge fund owner, Epstein got his wealth from other people having it: after all, it takes money to make money—this is how you keep the system enshrined in its toxicity and impervious to dissection. This is how you ensure class divides. A hedge fund manager who bragged that he oversaw over a billion dollars in other people’s assets, he was very
proud and self-aggrandizing
about peacocking the power money provided him.
With money, everything (even people) becomes things capable of being had, because he learned the golden rich person rule very quickly. Namely, that there is an asterisk next to every rule: that with excessive amounts of money, all things are allowed. That with money, laws and consequences become mere suggestions. Loopholes suddenly exist everywhere as tickets, arrests, and mistakes all disappear because the money says they can. The best lawyers are hired to convince the judge to throw it all away, to hire private investigators to collect blackmail, or send money to the victims to be silenced. Very quickly, rich people become anesthetized to the idea that parting with money (their power and cushion from reality) is just as hard on rich people as experiencing actual consequences are for the rest of us.
Jeffrey Epstein
These behaviors aren’t always borne out of rich people wanting to do bad things: it is just an inherent benefit. In high school, I attended a prestigious and competitive private school in Connecticut, thanks to loans, scholarships, and a work study program that no longer exists. As an outsider to the wealth so many of the parents provide their children, it was easy for me to see the way their money changed the game and how they handled things inherently. I saw it on display even more grotesquely later on at college.
Do you know how many drunk, rich kids I heard say, “do you know who my father is?” and “I will ruin your life!” to me because they were stupid enough to get caught drinking underage at an extremely liberal-policied university? Several of these kids are now lawyers and politicians in DC, climbing up the power ladder like so many generations before them, hoping to secure their place in the powerful, moneyed world their parents established their reality in.
And here’s what’s even worse: some people don’t want to see ramifications befall rich people because they one day aspire to those same sort of heights. These aspirational types are banking that the system stays the same when they eventually find their fiscal footing; they want the ease money provides. They’ve been hurt and fucked over by a system that coddles the rich, and they want that sort of ease for themselves in life, even if it means giving leeway to alleged pedophiles. The closest thing to freedom humans can experience is what having money provides: a lack of consequences for your actions.
And that money can provide that is exactly the problem, and it’s why a man like Epstein—just one of many, many rich men who do this very thing—has been able to get away with being confronted with his (alleged) abuses for years and years. He is alleged to have preyed on naive and/or vulnerable children. Yes, children. They could not have had any idea what they were truly getting themselves into, themselves desperate and/or previously abused. The allegations are that the were flown to homes on private jets and helicopters, crossing state (or international border) lines, and instantly muddying up the ability to prosecute the crimes.
Once you’re rich, you can literally do anything, because losing money hurts less than learning actual lessons. Having money is the real freedom, not the creation of equality via laws.
It’s why we need more women in positions of power. It’s why we need to tax the wealthy more, as

Watch a Professional Princess Walk Us Through Her Cosplay Beauty Routine