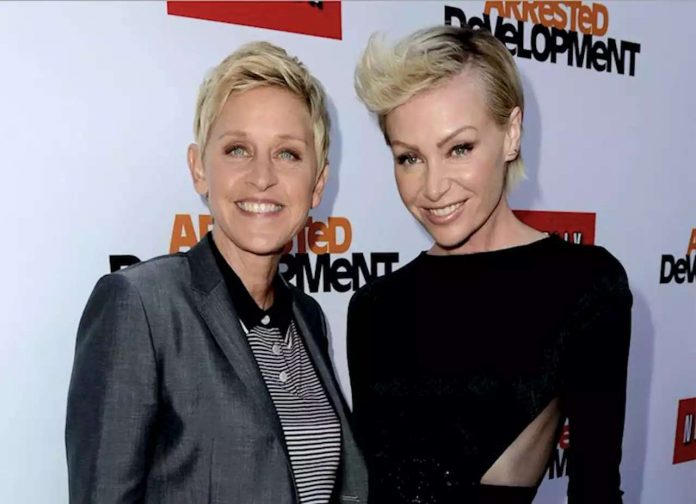 Ellen DeGeneres did not want to divorce Portia De Rossi after she supposedly refused to adopt a baby with her. It was untrue a year ago, and it’s still false.

want to divorce
Portia De Rossi
after the actress refused to adopt a baby with her? That’s what was alleged last year in a magazine report.
Gossip Cop
noted there was no truth to it back then, and it’s clear to this day the entire premise was false.
A year ago, the
Globe
maintained it took some “convincing,” but eventually de Rossi went along with DeGeneres’ plan to adopt a child together. However, as soon as the spouses began to have marriage problems, asserted the magazine, the actress changed her mind and “refused” to adopt a baby with DeGeneres. Among their marital issues, according the supermarket tabloid, was that DeGeneres is a workaholic who prefers spending time at the studio over being with de Rossi. A supposed source was quoted telling the publication how it was so bad between them that it would take a “miracle” for de Rossi and DeGeneres not to divorce.
In reality, just about three weeks after that phony report, the happy couple celebrated their 10th wedding anniversary. To mark that milestone last August,
DeGeneres posted a video on Instagram
which featured snippets from their marriage ceremony.

And now 365 days after the bogus adoption story, the talk show host and de Rossi are still very much together.
Equally significant, DeGeneres and de Rossi have been open and honest in the past about how they agreed early on in their relationship that neither wanted to have children. “We like our conversations not being interrupted and our furniture without sticky grape juice on it,” DeGeneres explained in a
Daily Telegraph
story just a few years ago. And several months ago, DeGeneres discussed in a
New York Times
profile how she and her wife are constantly plagued by false reports. “I hear Portia and I are divorcing every other week or having a baby or whatever,” she told the paper dismissing the untrue rumors.
At the time of the initial report about
an impeccable insider assured us the claim was laughable, and now 12 months later there’s no question how inaccurate the tabloid’s article was. Nor has the magazine become any more reliable since then. Not long after that tale,
Gossip Cop

Goldie Hawn Is Sad Which Is Just One More Thing to...