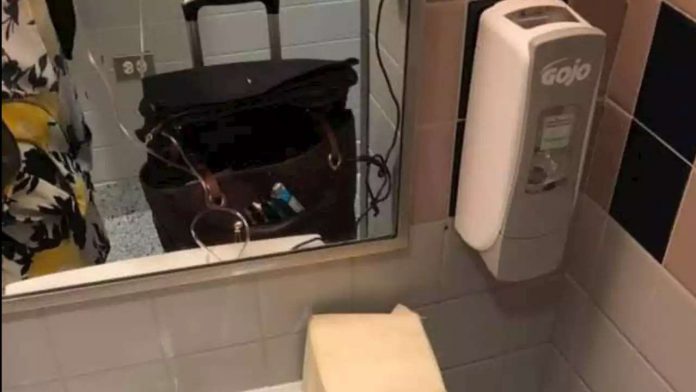 After being shamed for pumping in an airport bathroom, an anonymous mom shared her story with Breastfeeding Mama Talk on Facebook.

a woman’s body
is not merely an object that serves and fulfills sexual desires?” she continued.”That the stigmatization of women harms all people?”
After all, she notes,”by looking at me in disgust, [the mother] was conveying to her child that I was doing something wrong or shameful with my body.”
And
, how true that is.
It isn’t just embarrassing for the
; it acted as a teaching moment for the woman’s son — one that no doubt reinforced to him that breasts are shameful and private, and under no circumstance should they be shown in public.
You know, even if it’s in the middle of a private
women’s bathroom
, and the reason they are even partially exposed is for one reason and one reason only: To provide food for a baby.
Many moms were quick to jump in with a show of support, and say that they too have been there.
“I’ve pumped virtually anywhere and everywhere since going back to work,” wrote one mother.”
Breastfeeding and working
an on-the-go job is SO HARD. Cheers to you for making it work!”
“Thank you for standing up for your self,” wrote another.”Yes this was a fantastic opportunity for the child to learn something new and this mother failed. While the country is slowly catching up to our need for clean locations to pump many are still way behind.

Another agreed that Mother’s Rooms aren’t always the best option.
“I found Mother’s rooms incredibly inconvenient,” wrote one woman.”I found a chair next to an outlet in the terminal and pumped with my oversized nursing cover. I got some weird looks but i was always covered and It was way better than trekking across the airport for the single mothers room or waiting in line to use it.”
The message here is clear: Breastfeeding acceptance starts with us. Here.
Now
.
The breastfeeding shaming may not come to an end in this generation, but maybe — just maybe — it might by the next. To get there, though, we need to show our kids (both boys
and
girls) what acceptance looks like.
And no, that’s not shielding their eyes when we see another mom — *gasp! —
pumping in a bathroom
.
“Slowly, I’ve gotten more comfortable with nursing and pumping, and have begun to see the beautiful things that my body is capable of doing,” the mother’s post concluded.”I’m not going to accept shame when I’m trying to do the best for my child. I won’t ever make a parent feel less than for doing what they think is right. Even if they show me their nipple(s) in the process.”
Share this Story

Kylie Jenner strips down to bra as she poses beside mystery...