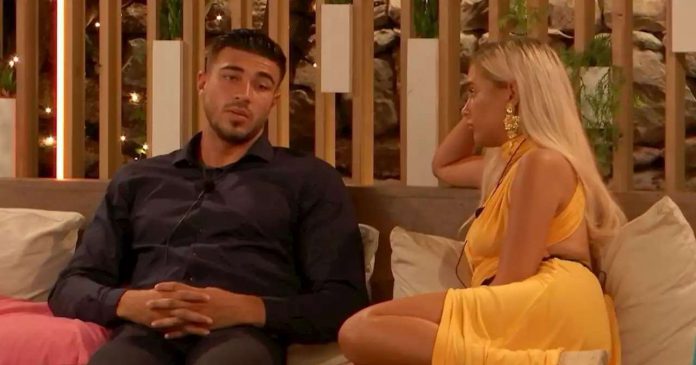 Love Island fans slammed tonight’s dumping result as a “fix” and accused bosses of trying to ensure that Tommy Fury and Molly-Mae Hague won the show.
This evening, Belle and Anton were dumped from the villa just one day before the final.
On Friday night, fans watched as each of the couples had to vote for the couple they believed should be dumped from the villa.
Tommy and Molly-Mae controversially chose Anton and Belle – even though they were one of the strongest pairs in the villa.
And heartbroken viewers flocked to Twitter in anger.
One tweeted: “#loveisland is a fix. In addition “People like a different win”, apparently.”
While another commented: “Can’t believe what a fix #LoveIsland is!! Belle and Anton should be in the final they only had one vote! So disappointed @LoveIsland.”
A third remarked: “Anton deserved better! They only had one vote and the public didn’t even get enough votes this year! FIX! #LoveIsland #LoveIslandAftersun.”
“#loveisland what a fix. So anton and belle shouldn’t even have been in the vote and yet they were and now out they go!!! Starting to think I’ll not be watching this show again!!” another wrote.
The couple were strong contenders to win the ITV2 show, but failed to get enough votes against Curtis Pritchard and Maura Higgins and Ovie Soko and India Reynolds.
Tommy Fury and Molly-Mae Hague and Amber Gill and Greg O’Shea didn’t receive any votes from their fellow Islanders and were automatically sent through to the final.
Unfortunately for Belle and Anton, they received the fewest votes and were dumped from the Island.
The couple have had a huge journey ever since they first met when the female Islanders left the villa to go to Cash Amor.

Belle was instantly keen to get to know Anton and the pair enjoyed a cuddle in bed during the very first time they met. However things almost turned sour for the couple after Anton’s flirting with a supermarket checkout girl was exposed.
He further infuriated Belle by saying Anna was the best kisser in the villa during a game.
The pair became embroiled in a heated row as they both threatened to call things off. However Anton and Belle later apologised to one another and seemed stronger than ever.
Outside the villa, however, Belle’s dad Tamer was not so impressed and said that he wanted to give Anton a good talking to.
So, it was unsurprisingly a little tense when Tamer entered the villa tonight and a nervous Anton finally came face to face with him.
With sweaty palms, Anton said to him: “We’ve got a few words to have.”
Belle’s dad ominously replied: “We’ll have ‘the’ chat later.”Anton then went over to the fire pit with his mum, who admitted that she was upset during his first weeks in the villa because he kept being pied all the time.
Meanwhile Belle was keen to know what her parents thought of Anton.
Belle’s mum replied: “He’s got a sweet side.”Anton also asked his mum what she thought of Belle, who said: “I didn’tlike her at first. But I get her. And what I like about her is she’s stood up for you the wholetime. She’s got your back.”
Their families later came together at the fire pit and Belle’s dad gave his verdict on their relationship: “You’ve had a few frosty moments. But you’ve done alright.”
*Love Island final airs tomorrow night at 9pm on ITV2

Giving Yourself a Pedicure Is About to Suck Way Less