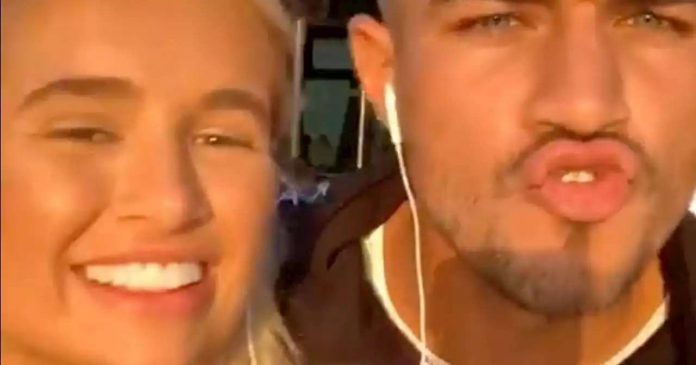 They may have lost Love Island but Tommy and Molly-Mae assured viewers they were very much a couple after being swiftly told they had second in the show.
But the pair have remained stealthily silent on social media since the show ended – despite virtually every other couple in the final sharing messages of thanks or even a cheeky bed selfie.
Fans only got to see a glimpse of the pair today in Greg and “message” Ovie’s Instagram stories as all the Islanders, finally rid of I Saw It First garbs, seemed unnaturally enthusiastic about getting on a budget flight back to London.
In Ovie’s Instagram stories Molly-Mae and Tommy can be seen posing up for Maura’s video before quickly going back to their phones afetrwards.
Fans immediately spotted the pair seemed different to their behaviour in the villa and started to worry they had split.
Molly goes back to her phone quickly as Tommy sheepishly looks over her shoulder.
Although others commented after almost nine weeks away from their phones it is only natural to be glued to it as most of the Islanders’ social media following has exploded.
“Molly Mae and Tommy seem different to the villa – I hope they haven’t split already!”, one fan worried.

Another said: “Is it me or does Molly seem more interested in her phone than Tommy”
It comes after during their time in the villa Molly was hit by fakery rumours.
The Online Buzz challenge had a tweet that said “Nah Tommy deserves more than Molly-Mae, she doesn’t like him, she likes 50k.”
That sent Molly into a tailspin as she raged in the Beach Hut: “Wow. I’m actually fuming.
“I’m annoyed because I just feel like to bring money into it, what am I meant to say? I’m speechless, to be honest.”
The tweet even stunned Tommy, who asked the other boys if they thought Molly was playing a game.
Not particularly reassuringly, Anton told him: “It’s not for me to say, mate, it’s got nothing to do with me. You know what your relationship is like, it’s not for me to say.”
The same allegation came up in a later challenge, when an online headline accused Molly of “looking bored” when Tommy was talking about their future on the outside.
She got upset once again and strenuously denied only being with the boxer for the £50,000 prize.

7 Mascaras That Will Give You Your Longest Lashes Ever