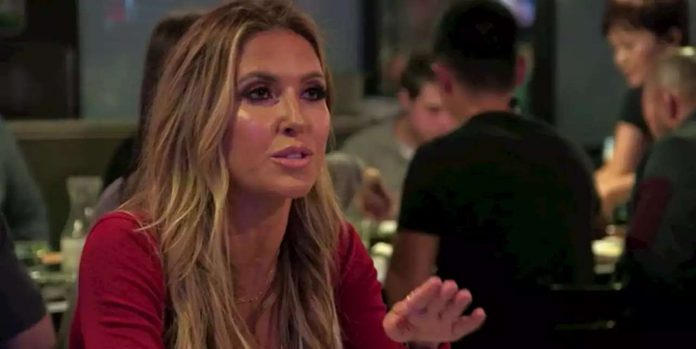 Spencer Pratt spills allllllll the tea about the latest episode of ‘The Hills: New Beginnings.’

On Audrina and Mischa complaining about going to Las Vegas:
I can’t believe
anyone
had the audacity to complain that they got tons of free food and didn’t even have to listen to Brody DJ. So what? You had one demon at the dinner table? That’s any night in L.A.
Even I’ll go to a free lunch with Stephanie Pratt. Will the scene get cut because I’m rolling deep on two Bloody Marys? Absolutely. But did I get a free meal that would have cost me $200? Also yes. I wish they hadn’t cut the scene, but I guess Stephanie didn’t murder me in cold blood so production had to kill it.
On Mischa’s ”audition of a lifetime”:
You know, I can definitely see her doing something at Netflix. Maybe not an original, but they’d definitely call my girl up if they’re short one star and need someone who can do one—maybe even two—accents.
She was English, she was southern, she was from some swamp in Louisiana. Wow. And then fighting Justin Bobby over who Audrina calls most? She might be the breakout reality star of this season too.
If they don’t have at least one of Mischa’s auditions on every episode this season, I am going to the production company’s Yelp page and leaving a one-star review.
MTV
I think Mischa’s WME super agent told her, “Look, the more you talk on a reality show, the more you get paid.”
If you don’t bring it, you get to do a photo shoot in your backyard and tell people you’re the CEO of an organics company and just repeat, “I’m Whitney, and I’m so very happy,” and whiten your teeth until you die. No one wants that.
On Heidi taking music advice from Justin Bobby when he’s been treating Audrina like she’s a psycho (and also spending time with Stephanie):
Did Brody invite us to Vegas? No. So we’re just seeing this behavior for the first time. We’re also the audience. If you watch closely, you can see that Heidi is at home 24/7. She’s not at the Korean restaurant doing deep dives with Audrina and Justin over spare ribs. She’s learning all of this now.
Wait until season 2. She’s going to have a lot to say about every cast member—because now she sees how they act around each other. She hasn’t seen Bobby in more than 10 years.
MTV
Heidi:
I was trying to keep everything neutral. I’m not helping anyone choose between Stephanie and Audrina. I’m helping myself get my music career off the ground. Watch out for new music dropping soon.
To be honest, I don’t have time for anyone’s relationship problems. I hardly filmed this season. I was not in anyone’s drama because I was breastfeeding and worried about my son and that’s all I was thinking about the whole season. I was just trying not to have a panic attack.
MTV
I also had no idea that Justin was treating Audrina so badly. I knew they were seeing each other, but she never told me the extent of their problems. That’s something I wouldn’t have put up with. I think I can get my music career up and running without Justin, thanks.
On Audrina and Joey confronting Stephanie about…well, everything she does. But mostly the backstabbing:
Spencer:
I thought there were going to be even more fireworks, because Stephanie doesn’t like to be confronted. I was actually pretty impressed.
Maybe we’ve just discovered her secret: She’ll destroy you one-on-one, but she doesn’t know what to do if someone brings backup. Bringing Joey was really smart on Audrina’s part.
MTV
It’s always so strange to watch Stephanie play like she’s a cool girl who will never talk shit when you know she’s calling up podcasts as soon as she leaves the building. She lives in a fantasy land, and I’m glad other people will play pretend with her at this point, because it gets old quickly.
Maybe she’s got some kind of memory disorder? This week she was saying how she’ll always talk to your face, but I remember a week ago when she was libeling Joey like it was her job.

Maybe Joey just talked to the wrong face? Steph’s got so many of them that sometimes it’s hard to tell.
MTV
I would’ve loved if just Audrina set her straight, but I think Audrina’s scared of Stephanie. I get it. DITTO. All caps. She brought Joey because Joey isn’t scared. Joey must have grown up with savages, because she wasn’t even taking the smallest bit of Stephanie’s bullshit. Heidi says she’s not scared either. Stephanie doesn’t want to tangle in season 2.
You know what? We’re all sleeping on Audrina, but she’s got that new confidence from dealing with the police and having to go to court. You think she won’t dial 911 on Stephanie?
MTV
On Audrina kicking Stephanie out of their dinner:
Audrina didn’t want Stephanie at that dinner for one second. She knew she was going to tell her to bounce from the second she walked in. But she was going to get that free dinner for her and her friend. I can respect that.
On whether Audrina should have just let things with Stephanie and Justin Bobby go:
This is a reality show, baby. No one ever lets anything go.
On Mischa fighting with Justin Bobby:
Heidi walked in on their fight at Frankie’s, and she walked right back out again because there weren’t any cameras. That was for real. If Mischa keeps this up, we’re going to have a real star on our hands. If she’ll fight with no cameras present, imagine the damage she’ll do when four are around.
MTV
On Justin and Audrina’s “dinner”:
That fight was hella real because they didn’t even stay to eat dinner. Like, dog, I get that you have to argue about your relationship, but at least get a few skewers before you race each other to the door to prove who’s really ending this relationship. That’s very adult, by the way. “You can’t break up with me! I broke up with you first!”
MTV
This is the Audrina we’ve been waiting for all season. You can tell she’s used to litigation because she sat down, put her shit on the table, and told Justin she didn’t have time for his games. That’s a lesson we can all learn about self-respect. She’s like, “You think you can confuse me into giving up this one? I know all the Pokémon moves. You’re not even getting a free app on my time, player.”
That was a great lesson for everyone out there: If you’re not feeling something, you don’t have time for an appetizer. You’ve got shit to do.
MTV
Are Justin and Audrina over?
Not by a long shot. They can’t even look at each other, which means there are still feelings. You see me and Brody? We can stare each other down all day long because there’s nothing there. But these two? We’ll see them fighting at even bigger and better restaurants. I guarantee it.
On what’s going on with Whitney and Stephanie:
Whitney’s always so confused. She thinks she’s coming on this show to advertise dishes and
Little House on the Prairie
dresses, and then she has to pretend she was friends with Stephanie in high school. Those two
hated
each other. You could see Whitney’s entire face hit the brakes. She was out here showing us how white she could get her teeth with free product and now she has to create an alternate reality where she and her mortal enemy weren’t just besties in high school but are also friends now.
Stephanie hated Whitney with her entire being in high school. When Stephanie started talking to her on TV, Whitney must have had a full-on body snatchers experience. She’s like,
Where am I and why is Stephanie asking me to defend her? This isn’t the Tupperware I came to promote!
I bet Whitney’s regretting wanting a story line now, but I gotta be honest: Every time she has to interact with Stephanie, she’s earning her spot in the credits.
Related Stories

FBI Has DNA Match for Suspect in Nashville Christmas Bombing

Bookmark this for your next tr

A Brief History of Female Horniness