Home Woman We Need to Talk About That Gilmore Girls’ Episode Where Rory Steals... 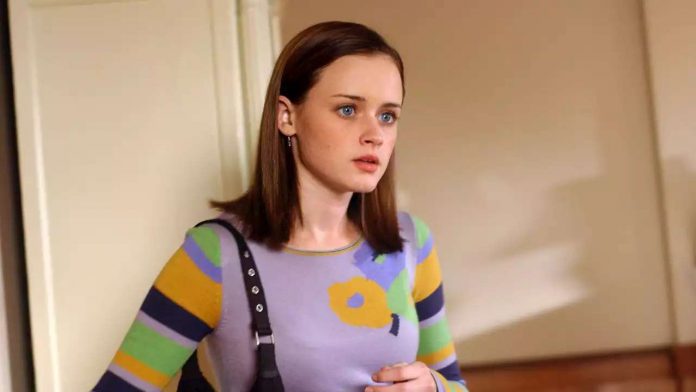 It’s been 15 years, and I’m still thinking about it.

Moby Dick
, which was sort of paraphrasing lots of things.
In the beginning of the coronavirus pandemic, when it was exceptionally wintery in my soul and I became briefly convinced that American society was going to collapse, I soothed myself by watching
Gilmore Girls
. Not because the show brings back delightful memories of my childhood, but because
Gilmore Girls
is the closest any television program comes to being a sedative.
I am happy for anyone
(that’s the exact length of
Gilmore Girls,
Bingeclock
, which I would trust with my life) watching human ponytail Rory Gilmore wriggle around Connecticut, moralizing and eating Pop-Tarts. I do not watch it for the banter or the pop culture references. I only watch it when I need to sink into a down-feather version of life, where everything is milkshakes in a gazebo and there is no such thing as bad news and every problem can be solved by my grandparents’ bottomless bank account. For 43 gorgeous minutes, everything is gentle and low-stakes and deeply supportive of my idea to order takeout again.
That is, with one, absurd exception: when Rory steals a yacht.

Rory: "I stole a yacht."
Lorelai: "Yes, I know. The nice men with the guns told me."
—Gilmore Girls

In the first scene of season 5, episode 21, Rory is eating chocolate fondue in her grandmother’s mansion. By the time the episode ends, she will be upon the rollicking waves of the high sea with her lover on a stolen yacht. For many
Gilmore Girls
most troubling and inexplicable plot points
in the series.
For others (well, for me) it is a high point: It is both the most hilariously entitled, absurd, rich-person decision anyone on the show makes, and it is also the only time Rory experiences consequences. On both levels, it is immensely satisfying.
Over the course of just three episodes, we see Rory as an off-the-rails swashbuckling Robin Hood in a cardigan (stealing from the rich and giving to the slightly less rich!). Then we see her smacked down by the iron fist of accountability by the Stars Hollow equivalent of Judge Judy. What more can we ask of nostalgia television?
Advertisement
The crime? Grand theft on the high seas. (Actually, the judge says it’s criminal mischief in the third degree, which is a misdemeanor.)
The motive? Losing her damn mind after her boyfriend’s dad attempts to destroy her. And honestly? Fair! As much as I am not a Rory Gilmore fan, as much as I wish she would enunciate and show
more interest in her friends’ lives
and stop being so infuriatingly cutesy, this is very relatable.
In episode 21, Rory, who is sadly wearing a T-shirt under her dress, sits down with her boyfriend’s dad, Mitchum Huntzberger, who is also her boss. Rory’s lifelong dream is to be a reporter; Mitchum is one of the most powerful media men in the world. The Huntzberger family has shown her the cold shoulder (because Rory’s family rode second class on the Mayflower or something), but Mitchum has given her a summer internship and a chance to prove herself.
“I’ve worked with a lot of young people over the years,” Mitchum, who is handsome and scary, tells her, smiling. “I’ve got a pretty good gut sense for people’s strengths and weaknesses. Whether they have that certain something to make it in journalism.” He goes on, “And I have to tell you: You don’t got it. Now guts can be wrong—mine’s been wrong before, but not often…. I just don’t think you really have the drive.”
“You’d make a great assistant,” he adds.
Rory defends herself (impressive—I would be weeping uninterrupted strands of snot at this point) and the next thing we know, she is down at the marina, accusing Logan of flirting with other women, snarling about sexism, and convincing him to help her steal a yacht, using the sweet, sweet words of
Moby Dick
. This is the Rory I have been waiting for, through almost six seasons of comfortable narcolepsy.
First, Rory asks if they can take a trip on Logan’s family’s yacht. He politely points out there are dozens of people on the yacht, since that is where his sister is hosting her birthday party. Then Rory, champion of the people (sort of), says, “Oh. Well don’t you have another one?” (Of course the answer is yes, but it’s “far away.” What is the point of having a billionaire boyfriend if he can’t even keep his yachts organized?)
Logan suggests a road trip to New York. Rory reacts as if he’s suggesting they go foraging in the city dump and insists they take to the ocean.

Advertisement
“You know the beginning of
Moby Dick
, when the narrator says when he finds himself ‘growing grim around the mouth and wanting to knock people’s hats off’ he takes to the sea? Well, I feel like knocking people’s hats off.”
So they run down the dock to steal a yacht.

My exact aesthetic today is that scene of Gilmore Girls where Rory gets so upset about literal nothing and makes Logan steal a yacht. I NEED TO TAKE TO THE SEA

What Melville’s narrator actually says before the hats part is, “Having little or no money in my purse, and nothing particular to interest me on shore, I thought I would sail about a little and see the watery part of the world.” Having little money and no connections, and therefore taking a dangerous low-wage job, isn’t something that Rory or Logan know about. If Rory actually wanted to experience something like a modern Ishmael, it would probably make more sense to steal away on a shipping container vessel. Oh, well. To the floating luxury hotel!
Actually, in the process of writing this article, I dug up a repressed memory of the time that once, in an unwise post-breakup conversation with an ex whose dad is a successful professional journalist, my ex told me, “I showed my family your most recent article.”
“Oh, what did they say?” I asked.
“We all laughed at you,” he replied.
I did not steal a yacht after that conversation, but maybe I should have!!!!!
Anyway, Rory is taken to a cell. In a police station! This is the sad but extremely predictable consequence of theft! For a full episode, we think Rory is off the hook—her mom understands, her strict grandparents don’t seem to care, and Logan has made it clear that his father will hire lawyers to protect both of them. Sure, she’s clearly suffered a deep personal wound and plans to drop out of Yale and give up on her dreams, but the yacht episode is apparently over.
And then. Rory, wearing yet another insane cardigan, goes to a “quaint” courtroom with her grandpa’s fancy lawyer, who has promised her that with her Yale resume and high-up connections, she’ll get a slap on the wrist and a few hours of community service.
Advertisement
“I understand that the defense is presenting this as ‘a childish lark, a youthful indiscretion,’” the steely judge says to Rory. “Well, I take the law very seriously. And if there’s one thing I have very little tolerance for, it’s rich, privileged children viewing the world as their private playground. I don’t care who you are. I don’t care who your family is. When you commit a crime, Miss Gilmore, there must be consequences, period. Twenty hours of community service won’t do it.”
And so Rory Gilmore gets 300 hours of community service, which she must complete in six months. (For reference, 300 hours is the length of two back-to-back viewings of all seven seasons of
Gilmore Girls
, or the full audiobook for
Moby Dick,
played twelve and a half times.) She is also placed on a year of probation, and the incident is put on her permanent record, to be reconsidered after five years. The judge points out that if she withdraws her plea and goes to trial, she will be eligible for a felony charge.
©Warner Bros/Courtesy Everett Collection
It’s so, so refreshing to see, as Moby Dick would say, Rory Gilmore’s hat get knocked off.
Gilmore Girls,
for all its obsession with class and status (see Chilton, Yale, boutique inns, owning multiple yachts), gives us a moment to consider how the justice system almost always favors white people and wealthy people. “If you knew the number of truly guilty criminals put back on the street by this man here, you’d never believe in the criminal justice system again,” Mr. Gilmore tells his granddaughter, when introducing her to her free, top-tier lawyer. But this time it doesn’t work. For once, even on a TV show that is about a fantasy life of pure comfort, we see a little actual justice getting served.
And we see some personal development too: Rory Gilmore, my television nemesis, does something wild, gets in trouble, and deals with it. She doesn’t get out of it by smiling cutely or quoting classic literature or knowing the right people. She has to stand by the side of the road, picking up trash. She has to meet different people and develop a personality, a bit.
No more damp, drizzy November—Rory Gilmore wearing a community service vest brings the sunshine back to my soul.
Jenny Singer is a staff writer at
Glamour.

Can having a lot of sex give y