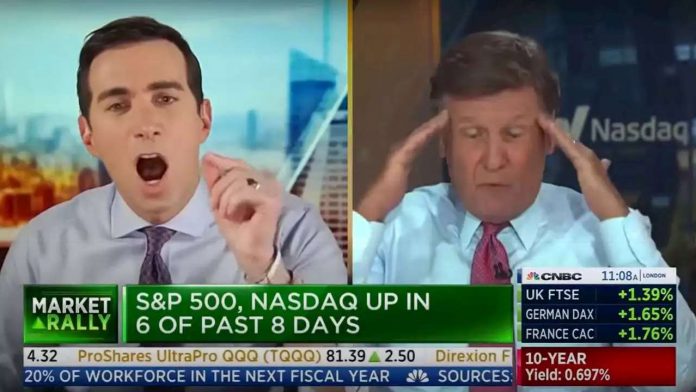 The ‘Squawk Box’ anchors got into a shouting match as Sorkin accused his co-anchor of ‘abusing’ his position as a journalist.

While discussing the stock market’s recent rebound despite the national economic downturn, Kernen sparked a fiery rebuke from Sorkin, who accused his co-star of trying to dismiss his questions and downplay the impact of the coronavirus crisis.
In response, Kernan, 64, said that Sorkin had needlessly”panicked” throughout the crisis.
“You panicked about the market, panicked about COVID, panicked about the ventilators, panicked about the PPE, panicked about ever going out again, panicked if we’d ever get back to normal,” Kernen said.”And what good is it?”
“Joseph, you didn’t panic about anything!” Sorkin, 43, shot back, shouting over his colleague.
“100,000 people died, Joe, and all you did was try to help your friend, the president,” Sorkin continued.”That’s what you did. Every single morning on this show. Every single morning on this show, you have used and abused your position, Joe. You have used and abused your position.”
Kernen responded by saying that Sorkin’s accusations were”totally unfair.

“I am trying to help investors keep their cool. Keep their heads,” Kernen said.”As it turned out, that is what they should have done.”
“I wasn’t arguing to go sell your stocks, Joseph. I was arguing about people’s lives,” Sorkin responded to Kernen’s business-minded explanation.”I am begging you to do the news, Joseph, please.”
The on-air verbal confrontation comes at a time in which the human cost of the pandemic, in the United States and across the world, has reached an unprecedented high. Meanwhile, the stock market has simultaneously rebounded from it’s record-setting drop back in March, when the country first began lockdowns and there was uncertainty in the marketplace.
In the United States, there have been
— which is over four times more cases than the country with the next-highest number of infections, Brazil, with 414,000 confirmed cases.
Worldwide, the virus has led to

Do I Need to Go to Seminary? – LifeWay Women All...

These Wildly Creative MetGalaChallenge Posts Are a Sight to See