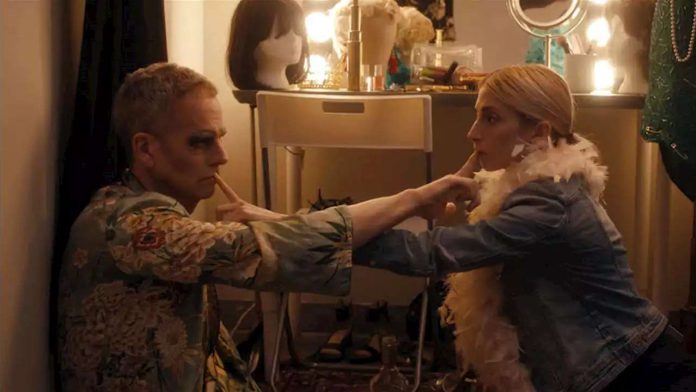 Molly Bernard plays a rudderless twenty-something attempting to give meaning to her life by helping an older gay man have a child in Morgan Ingari’s feature debut.

Milkwater
takes its title from “The Consecrating Mother” by Anne Sexton, the Pulitzer-winning mid-20th century American poet who wrote with stark confessional candor about the intimate physical and emotional experience of womanhood. That makes it natural to expect a singular focus in Morgan Ingari’s likable first feature about a directionless young woman who impulsively decides to become a surrogate for an older gay man she barely knows. What makes this disarming serio-comedy work, however, is that while it’s very much a complicated character study driven by the stealth rawness of Molly Bernard’s funny-sad performance, it wraps the same empathetic embrace around pretty much everyone in the protagonist’s messy orbit.
Premiering at the Brooklyn Film Festival, the small-scale, well-acted indie will appeal to fans of Bernard’s work on the popular TV Land series
Younger
, while LGBTQ audiences should be especially responsive to its sensitive consideration of the complexities of surrogacy and nontraditional family models.
Milo (Bernard) is a twenty-something, straight New Yorker who starts quietly panicking at the prospect of her queer best friends drifting away — pregnant lawyer Noor (Ava Eisenson) into her marriage to humorless wife KJ (Jess Stark) and impending motherhood; roommate George (Robin de Jesus) into a promising relationship with Teddy (Michael J. Berry), who Milo dismisses as his “recurring Tinder date.” Writer-director Ingari clearly is on Milo’s team but she doesn’t balk at depicting her self-centered view of these changes in her social circle.
The early scenes have the overwritten feel of sitcom dialogue — albeit decent sitcom dialogue — and Ingari gives Milo not one but two meet-cutes. The first is with 52-year-old Roger (Patrick Breen), a gay man who runs a drag bar, where he performs under the stage name Angela Merkin. When he gets stood up and she gets abandoned by George at the Phoenix (great to see this mainstay of the East Village gay bar scene playing itself), Roger and Milo instantly click. Not long after, she meets flirty musician Cameron (Ade Otukoya) at String Theory, the Brooklyn guitar shop where she works with three deadpan Australians (Alexander Hodge, Sean Rogers and Nicholas Hiatt) who specialize in cute banter. Even at its busiest, the store’s staff-to-customer ratio is four-to-one.
The movie initially threatens a pile-up of studied quirk, but the characters and situations develop in textured ways that gradually pull you in and engage your affections.
Having learned during their first encounter that Roger is giving up hope of ever becoming a father after two lost adoptions and a surrogacy that didn’t take, Milo volunteers over tequila in his dressing room to be his egg donor and surrogate. He’s just lip-synched to Robyn’s
“Dancing On My Own,”
so her reckless enthusiasm is understandable. But whenever anyone, Roger included, questions her reasons, Milo comes up only with vague responses about wanting to do something “bigger than myself… something terrifying and meaningful.” (Money is not a factor.)
Initially perplexed George becomes a swift supporter, or an enabler according to skeptical lawyer Noor, who is vocally opposed. “It’s never a decision with you, it’s always just an impulse,” she tells Milo.

Cameron learns about her intentions just as the sex is heating up on their first date. He takes the news on board, even if he seems unconvinced by the hunger for intense experience that’s supposedly driving her.
Ingari and Bernard negotiate a tricky balance between portraying Milo as a flake, plunging headfirst into a situation without anticipating the consequences, and as a vulnerable woman grasping for substance in a life that suddenly looks empty as her friends branch off into committed relationships.
Most of the well-drawn conflict stems from Milo’s efforts, once the home insemination proves successful, to insinuate herself into Roger’s life, at the expense of her developing romance with Cameron. She sees herself in some nebulous role “like an aunt or a nondenominational godparent” to the child she’s carrying, while that was never part of the agreement for Roger. He’s increasingly clear about drawing boundaries, both personally and legally, asking her to sign a contract giving him exclusive custody as the genetic father. This raises red flags with Noor and causes a rift in that friendship.
It’s a testament to Ingari’s nonjudgmental fondness for her characters that she never glosses over the flaws of either Milo or Roger. Milo is stubbornly blind to the signals, leveraging her pregnancy for friendship benefits, almost to stalker levels; Roger is borderline harsh in reminding her that after waiting so long to be a father, it’s something he needs to do alone, at least for now. She feels even more excluded and hurt when he starts seeing a guy he met at a gay dads’ support group (Justin Crowley).
The modulation from light comedy into more layered dramatic territory is deftly handled; both Bernard and Breen play the shadings of their characters’ clashing positions with humanizing insights that temper their more self-serving behavior. And their gentle reconciliation after a break is touching, without artificially bridging the distance. There are routine scenes like the familiar alarm at the onset of labor pains. (Can there just once be a New York cab driver who doesn’t make a fuss about taking a pregnant woman to the hospital?) But the bittersweet resolution feels emotionally earned and refreshingly imperfect, not too tidy.
Milkwater
is a modest film that acquires pleasing depth as it progresses. Ingari displays a nice feel for her milieu, and for the knotty bonds connecting people that are tested as their chosen families take new shapes. Above all, the writer-director and her lead actor show a warm understanding of a central character whose questionable choice sends her stumbling forward toward a new maturity. And an expertly gauged closing scene with just the right hint of sentiment maximizes the movie’s strengths.
Production company: Enfant Terrible
Cast: Molly Bernard, Patrick Breen, Robin de Jesus, Ava Eisenson, Ade Otukoya, Jess Stark, Michael J. Berry, Alexander Hodge, Sean Rogers, Nicholas Hiatt, Khalid Rivera, Justin Crowley
Director-screenwriter: Morgan Ingari
Executive producers: Ash Christian, Margaret Sullivan, Joe Alvarado, Molly Bernard
Director of photography: Maria Rusche
Production designer: Cheyenne Ford

Complete List of Oscar Foreign-Language Films in the Fray