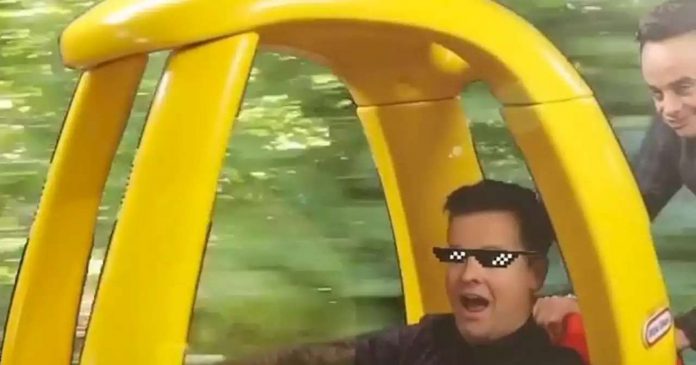 Presenting duo Ant & Dec found a kids’ toy car backstage on one of their shows, showing off their juvenile side in a hysterical video

Ant & Dec have been larking about backstage.
In a clip shared to the pair’s Instagram, Dec got in the giant toy car while Ant pushed him about.
Ant & Dec, both 44, edited the video to make it look like Dec was speeding through the country.
“Let’s get you in that,” Ant said.
“That’s a bit of me that is,” Dec admitted as he squeezed in, “Listen to that roar!”
The background was switched up to show the countryside whipping by Dec as he sped along, a pair of shades edited onto his face.
They joked in the caption: “Buckle up! Introducing the drive of your life. The Decmobil.
“On the road price £59.99. Shades not included.”
Ant & Dec were likely backstage at Britain’s Got Talent as they filmed the auditions stage earlier this year.
It’s currently unknown when the show will go ahead with its live shows, after the coronavirus crisis brought production to a grinding halt.
While it’s not yet clear if this weekend’s show – the last of the auditions – will be the last for a while, the live shows have had to be postponed indefinitely.

ITV previously said in a statement that they’d examined all methods of going ahead with the live shows, but it just wouldn’t be possible without a studio audience.
A spokesperson told: “In light of the latest government health guidelines and in line with our priority of safeguarding the wellbeing of everyone involved with our programmes, production of the live shows cannot go ahead as planned.
“The live finals will therefore be broadcast later in the year.”
Read More Showbiz editor’s picks Ant & Dec meanwhile have been doing their part support those on the frontline against coronavirus during the ongoing crisis.
Appearing in a video alongside a host of other famous faces to thank the NHS, they’re also auctioning off an NTA each to raise funds for medical scrubs.
They’ve also both been snapped clapping for carers outside their homes.