Home Woman Can You Really Work Productively at Home? 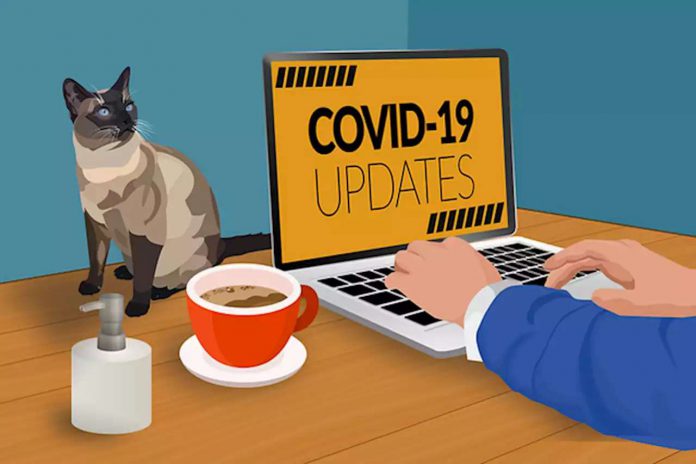 A new study tackles the question of how to make work from home work for you.

COVID-19
pandemic and decisions by employers to allow telecommuting.
Are you better able to use your time now that you don’t have to physically commute? Depending on how far you live from your workplace, you could be saving precious time that you can now spend on family, recreation, or just plain de-stressing. If your job involved overnight travel, the time and energy savings are even greater.
Just as your clock now has hours added back into it, your clothing and grooming budget may be growing as well. No longer do you have to worry about your work clothes, or at least the work clothes not visible on videocalls. Even if hair salons and barbers are opening their doors again, you may feel that booking an expensive trim or color job may not be worth it. Yes, you’re losing out on some enjoyable forms of diversion, but maybe you feel it’s nice not to be forced into having to spend your hard-earned dollars just to keep up your appearance.
Even though you now technically have more time and energy to devote to your job, without all the trimmings and trappings, it may occur to you that your ability to focus is fading. There may be kids at home who need feeding and perhaps schooling, and even if you don’t have a family, the temptations to avoid work seem to be everywhere. In the workplace, you had some distractions in the form of water cooler chats and lunchtime breaks, but these never held the allure of unsupervised time online shopping, videogaming, or just plain napping.
It should come as no wonder that, with this list of pluses and minuses (and more), businesses are wondering what they may be gaining or losing in this new workplace environment. Some may be saving money by not having to maintain an office space, and bosses themselves find their expense accounts accumulating cash for perhaps the first time ever. But are they getting as much out of you as they can?
Boston Globe correspondent Scott Kirsner, in a
May 2020 column
, tackled this question by consulting the work of technology industry analyst Rebecca Wetteman, who surveyed 325 work-at-homers, half of whom were in the WFH category for the first time. The findings suggested that the drop in productivity associated with their new-found status amounted to about 1%; surprisingly, people with children showed less of a drop (2%) than those with no one but themselves to care for (a 3% drop). Citing the “lack of a babysitter principle” for the adults, not the kids, Wetteman speculated that people living alone were more easily lured into streaming Netflix and checking on their Twitter feed.
People estimating their own productivity loss are hardly the most reliable sources. What do their bosses say? Though it’s too soon to know for sure, Wetteman reports that the supervisors echo what their workers say, but only for short-term productivity. Over the long term, as companies start to lose some of the occasionally productive water-cooler chat, it’s possible that the WFH effect could start to show a decidedly downward turn, at least in some industries.
The jury may still be out on hard company data, but studies on the psychology of the WFH effect can provide insight into what factors could contribute to better productivity among teleworkers compared to workers in ordinary workplace environments.

A workplace that requires you to follow a strict set of on-the-job behavioral controls might be able to enforce compliance with certain guidelines, but at what psychological cost? Without these controls, could you be more productive because you have more energy overall and are just happier?
According to an international team of applied psychologists led by Technical University of Dortmund’s Lilian Gombert and colleagues (2020), a job that is high in self-control demands (SCD’s) requires that employees engage in “inhibiting, modifying, or overriding spontaneous and automatic reactions, urges, emotions, and desires that would otherwise interfere with goal-directed behaviour” (p. 326). Such workplace demands include being forced to put on a certain outward appearance, engage in heavy-duty
, resist distractions, and work on a task no matter how much you may dislike it.
The effort involved in meeting those SCDs can take its toll on your psychological health through
ego depletion
, or “feelings of exhaustion, low willpower, and reduced capacity for self-control” (p. 326). Forced to perform according to those SCDs in the workplace, you return home mentally exhausted. The only way to resist the harmful impact of SCDs on your equilibrium is to detach psychologically from work, allowing you to recover in your non-work hours.
Using a daily diary approach which tracked daily variations in SCDs with resulting variations in “subjective vitality” at home, the German researchers recruited 86 participants (64% female) employed in jobs ranging from care workers to consultants, ranging in age from 18 to 63 years old with an average of 40. Twice over 10 consecutive working days, they completed online questionnaires asking them to report on the SCDs they encountered at work such as having to suppress
anger
, resist distractions, and overcome inner resistance to unpleasant job tasks. In the evening, they rated their ability to concentrate (ego depletion), feelings of energy, and ability to detach from the job.
On the negative side, days with high levels of SCDs served to lower feelings of vitality via the proposed route of ego depletion. In other words, participants simply felt exhausted by the emotional demands of their jobs. The only protective device they had was to distance themselves mentally from their jobs, placing it on the back burner in their sense of personal priorities.
The Gombert et al. findings suggest that the WFH situation could prove to have benefits that outweigh the costs, then, at least in jobs that require extreme compliance with external demands forcing them to suppress their individuality. Your vitality won’t be depleted by needing to put on the kind of false front that may be required by your in-person job (other than in a videoconference call). As a result, you may actually have more energy and a greater sense of enjoyment overall. Not having to detach psychologically from your work, you may also feel more strongly invested in seeing your company succeed.
To sum up,

Police Join Protesters in Marches Across the Country Good Cops Are...