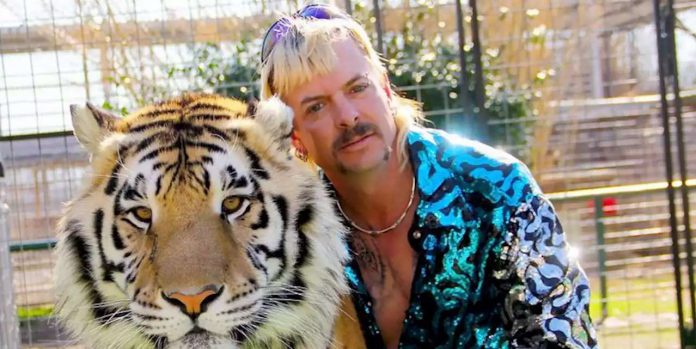 reports
that Big Cat Rescue owner Carole convinced a U.S. District judge in Oklahoma City that Joe (real name Joseph Allen Maldonado-Passage) fraudulently transferred the zoo properties to his mother, Shirley M. Schreibvogel, in 2011, as a way of avoiding them becoming part of his long-running legal battle with Carole.
In 2013, Joe was ordered to pay Big Cat Rescue nearly $1 million to resolve a then-2-year-old trademark-infringement lawsuit, which saw him using their logo on his own YouTube videos.
Tiger King
Netflix
Florida-based animal sanctuary Big Cat Rescue sued Exotic’s mother in 2016 over the property transfer, filing a
complaint
with stated:
“Schreibvogel [Joe’s mum] later admitted under oath that the zoo land was transferred to her by Joe Maldonado to remove it from the reach of creditors, including Big Cat Rescue, should BCR win its Florida lawsuit.

Schreibvogel also admitted in 2015, via a confession of judgment she entered into to resolve a lawsuit filed against he by the Chapter 7 bankruptcy trustee overseeing Joe Maldonado’s personal bankruptcy estate, that the zoo land was fraudulently transferred to her by Joe Maldonado in 2011 to avoid his creditors.”
Not a good day for Joe Exotic.
Cosmopolitan UK’s July issue is on sale now –

How Samantha McMillen Went From Magazines and PR to Styling Elle...

Where Do NBA Players Go From Here?

‘Working Girl’ Knows We’re Better Together Even When Physically Apart