Home Woman How Can I Run Kimmy Schmidt’s Life When I Can’t Even Run... 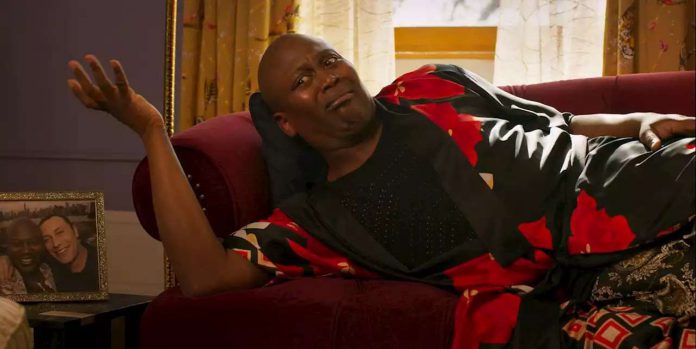 The new interactive Netflix special puts you in charge of the ‘Kimmy Schmidt’ universe. Homey can’t do that!

I made all the wrong choices. Much like 2018’s interactive
Black Mirror
Bandersnatch
,
a set of options for what a character should do next appear onscreen, and I’d have to make a choice to continue the story. Apparently, I failed. Thrice.
First, my random selections wrapped things up in about 15 minutes, without even introducing Jon Hamm’s Reverend character; my second and third times through were slightly longer but still didn’t involve any conflict the titular”
vs.
”
might suggest. Each time, Kimmy (Ellie Kemper) and her fiancé Frederick (Daniel Radcliffe) announced I’d reached the happy ending too quickly and sent me back to make better choices for a more satisfying narrative experience. This was great, because if there’s one thing I love as a casual TV watcher, it’s revisions! More constructive criticism for me, the person who hasn’t left his couch for hours, please!
Me when Netflix asks me to do labor.
Courtesy of Netflix
While it’s a wild and well-made diversion,
Kimmy vs. The Reverend
also poses the surprisingly difficult question: What if it’s possible to watch TV wrong? I don’t know if right now is the time for me to be encountering such quandaries. I’m just trying to be distracted from, well, everything. Or, as Titus (Tituss Burgess) might put it: I’m supposed to spend all this energy helping this white girl succeed when I could be napping? Homey can’t do that.
Despite the larger questions it provokes, Netflix’s interactive technology is a surprisingly good fit for the
Kimmy Schmidt
universe, where anything can and will happen. The show’s zany energy and willingness to dive down comedic rabbit holes seems tailor-made for a plot structure that branches out in dozens of directions. Whereas the half-hour length and traditional structure of the original series meant, for instance, that our time spent with the inimitable Maya Rudolph giving an Emmy-worthy guest turn as Dionne Warwick was limited, the interactive format almost demands that comedic bits spin out to their zaniest end. To wit, I spent a good portion of my first viewing watching Titus being woken up by random noises, including the tap dancing of a person in a hamburger costume. The only question asked by the forces in charge of the destinies of Kimmy Schmidt and friends seems to be,”Why not?!” And that’s a very good thing.
Courtesy of Netflix
The issue is, the addition of the interactive component poses the follow-up question:”And what are
you
going to do about it?” And that is where I say,”No thank you!” I’m too stressed to help Justin Kimberlake figure out her life! I know that the makers of
Kimmy vs.

The Reverend
had no idea they’d be releasing their inventive creation into a world where the population was sequestered in isolation, weighing the unknown consequences of dozens of tiny actions, but it seems bleakly applicable nonetheless. Go to the market or order curbside drop-off? Social distance walk with friends or Zoom happy hour? Mask or no mask? (This one seems to have an obvious answer, yet some people
still
want to debate not wearing one.) When one’s physical space has been reduced to the confines of one’s living arrangements, but one’s potential impact on the health and wellness of the world has expanded exponentially, who has the energy to help Kimmy plan her wedding? This is not a complaint about
Kimmy vs. The Reverend
; this is a complaint about reality and I would like to speak to reality’s manager. Yes, I’ll hold.
Courtesy of Netflix
Normally, I love Choose Your Own Adventures. (But since that’s a copyrighted phrase, I should also say I love whatever adjacent term Netflix has to use to avoid getting sued.) I love Free-Will-Page-Turnies. But whenever I read Free-Will-Page-Turnies, I always skip ahead to all the options, lodging my fingers in the different choices and holding off on committing to a decision until I’m certain I’ve discovered the best one. Conceivably, that’s possible with
Kimmy vs. The Reverend
. You can play it like a video game, returning to pivotal choices and making new ones until you’ve explored every avenue. Indeed, maybe part of the appeal of Netflix as a platform is the ease with which one can turn over hours to it. Usually the most one has to do with Netflix is click”Yes” when it asks”Are you still watching?” And honestly, that feels like too much work sometimes. But it’s possible that pending an evening, or even a whole day, making consequential but not grave choices that all but guarantee to spiral into antics and end happily is just the ticket to a kind of freedom. Yes, it’s possible to do it wrong, as I was informed by Daniel Radcliffe, but at least you can be sure nothing bad is ever going to happen.
This content is created and maintained by a third party, and imported onto this page to help users provide their email addresses. You may be able to find more information about this and similar content at piano.io
Advertisement – Continue Reading Below

What Leads a Person Down the Narcissism Pathway?