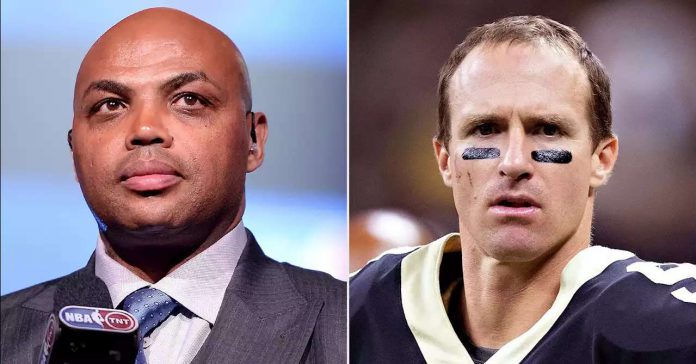 The NBA legend said, however, that Drew Brees’ words were ‘very insensitive’

We don’t care
if you don’t agree and whoever else how about that,” on Twitter.
“Drew Brees was wrong in his initial statement. But the level of vitriol, anger and things like that, I thought, was overkill,” Barkley said. “Drew Brees, whatever he said, he talked about [how] the flag means different things to different people. But I thought the way he was portrayed on television and radio today was not fair at all. Drew Brees has done some amazing things in New Orleans, in his life. I’m not even talking about football. He made a mistake in a statement.”
RELATED:
But Barkley’s
Inside the NBA
co-host, Kenny Smith, was “offended” by Brees’ comments and said it was evidence of his “white privilege.”
“It made it worse that it was Drew Brees, someone who we cheer for, who has teammates like us, that didn’t get us,” Smith said during the show. “Someone who is in the locker room every day. He doesn’t have the same excuse that some other people may have had.”
RELATED VIDEO: LeBron James, Aaron Rodgers Call Out Drew Brees After He Says Players Should Stand During Anthem
On Thursday, Brees apologized for the comments, saying, “it breaks my heart to know the pain I have caused.”
“In an attempt to talk about respect, unity, and solidarity centered around the American flag and the national anthem, I made comments that were insensitive and completely missed the mark on the issues we are facing right now as a country,” he said in a lengthy
Instagram
post.

“They lacked awareness and any type of compassion or empathy,” Brees continued, in part. “Instead, those words have become divisive and hurtful and have misled people into believing that somehow I am an enemy. This could not be further from the truth, and is not an accurate reflection of my heart or my character.”
He later doubled down on his apology with a video post, which he captioned, “I’m sorry it has taken this long to act and to participate in a meaningful way but I am your ally in this fight.”
To help combat systemic racism, consider learning from or donating to these organizations:
• Campaign Zero (
) which works to end police brutality in America through research-proven strategies.
•
works to make government more responsive to racial disparities.
• National Cares Mentoring Movement (
) provides social and academic support to help black youth succeed in college and beyond.
Close

In Honor of Pride Let’s Put Our Privilege to Work For...