Home Woman Hanifa’s 3D Fashion Show Sets the Pace for the Future of the... 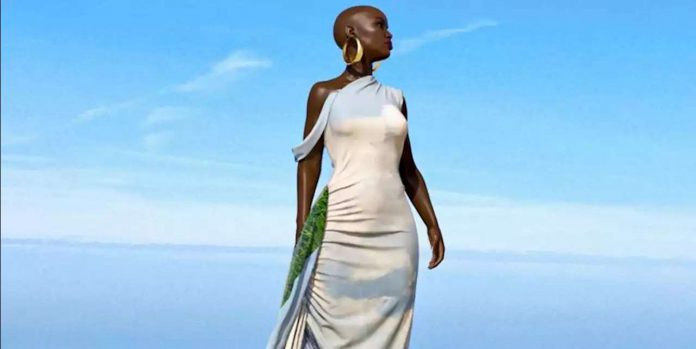 Designer Anifa Mvuemba’s virtual debut makes the case for the end of the front row, forever.

(@hanifaofficial) on
Mar 31, 2020 at 12:11pm PDT
Then, the coronavirus curveball happened. Where most independent brands would shudder in fear, Mvuemba saw an opportunity and worked round the clock to pull off a 3D fashion show that would later be dubbed “innovative,” “game-changing,” and “history-making” by viewers. But with great technology comes great responsibility—and technical difficulties. Five years of planning and seven months of execution were threatened with glitches within the first hour of Hanifa’s scheduled virtual runway debut. It’s not that she wasn’t prepared, she spent weeks testing out the show on a dummy account down to the hour before it was slated to go live on Hanifa’s official page at 7 pm EST. However, Instagram seemingly blocked the software on Hanifa’s account, forcing Mvuemba to pivot to her
other
Hanifa Bridal
. Who said virtual runway shows weren’t as chaotic and stressful as real ones?
The chaos subsided as the Pink Label Congo livestream gained viewers by the hundreds. Playing on a loop, the audience gained a first-class ticket to the Democratic Republic of Congo through a mini-documentary that played moments before the show began. Clips of news articles about the coltan mines appeared on the screen informing viewers that Congo accounts for over 60% of the world’s cobalt production, and the cell phones we use every day could contain the same coltan many children and workers have to toil in the sweltering heat for little pay each day. As much as it was a fashion show, it was also a chance to educate the audience on a war plaguing a country that seems a world away but directly affects us as well.
“I wanted people to feel what people from Congo have been feeling for years: oppressed,” she explains. Media outlets don’t cover news about the illegal child labor and abuse of power in Congo, and if they do, it’s “watered down significantly,” she adds. As a Congolese designer with a platform, Anifa M. hopes to help people to see that they’re also a part of the problem and help remedy the situation.

Hanifa’s Pink Label Congo show pulled in over 500 viewers.
Related Story
How Designers Are Getting Creative in Quarantine
Pink Label Congo is the second iteration of the Hanifa offshoot Pink Label, which debuted its inaugural collection on July 19, 2019. The nine-piece collection intentionally explored the juxtaposition of Congo history, marred by abuse of its citizens especially in coltan mines, and the country’s beautiful scenery woven into every thread, every color, every detail. Full-figured body-less models waltzed down the virtual runway with the Congolese-inspired collection draped around each curve and bend. The Kinshasa dress, a long-sleeved pleated mini, was dipped in the colors of the Congolese flag—red, blue, yellow.
“The red represents the pain and the blood and suffering of the country. The blue represents peace, and then the yellow star represents the hope of the country,” she explains. To represent the “poise” of Congolese women, Mvuemba designed the Zaire denim set. “All the women that I knew growing up, including my mom, were just so poised and strong. I’ve always known every auntie, every grandma, every woman that I encountered growing up to carry herself in this graceful manner and wanted Zaire to embody that strength,” she adds. The collection also features the Colette T-shirt made in partnership with the Responsible Sourcing Network. Hanifa will donate 20 percent of sales of the t-shirt to support Congolese families affected by the illegal Colton mining in Congo.
Kinshasa Dress
Mái Maxi Dress
Courtesy
As the finale look—the Mai Maxi dress fashioned after The Congo River—made its way down the runway, Twitter erupted with praise and Hanifa made its debut on Twitter’s top trending topics.
This content is imported from Twitter. You may be able to find the same content in another format, or you may be able to find more information, at their web site.
The fashion calendar, as we know it, is done. The weeks and collections and schedules? Reset. What

5 Sex Positions Every Gemini Should Try