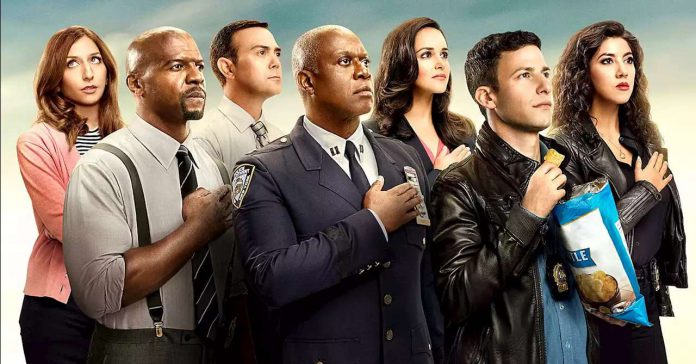 The stars and showrunner of NBC’s cop comedy ‘Brooklyn Nine-Nine’ announced that they have donated $100,000 to the National Bail Fund Network in solidarity with protests in response to the police killing of George Floyd in Minneapolis.

, as well as showrunner Dan Goor, the
B99
team said they “condemn the murder of George Floyd and support the many people who are protesting police brutality nationally.” They also promoted the hashtag #JusticeForGeorgeFloyd and added, “We encourage you to look up your local bail fund: the National Bail Fund Network is an organization that can lead you to them.”
The National Bail Fund Network aims to bail people out of jail or immigration detention, and since last week protestors have been getting arrested while participating in
. Floyd, a 46-year-old black man, died May 25 after a white police officer, Derek Chauvin, knelt on his neck for nearly nine minutes in an encounter caught on video. Chauvin has been charged with murder and manslaughter.
The
Brooklyn Nine-Nine
donation came after some people on social media called for actors who have portrayed police officers to donate money to organizations helping protestors, given that their performances have helped shape public opinion about law enforcement.

Beatriz, who plays Det. Rosa Diaz on
B99
, was among the first actors to heed the call. Early Tuesday morning, she tweet that she was donating $11,000 to the National Bail Fund Network. She matched the donation of
The Tick
Griffin Newman,
who began the initiative Monday.
“I’m an out-of-work actor who (improbably) played a detective on two episodes of BLUE BLOODS almost a decade ago,”
. “If you currently play a cop? If you make tens or hundreds of thousands of dollars a year in residuals from playing a cop? I’ll let you do the math.”
Many celebrities, like

Too Hot to Handle’s Harry and Francesca have split