Home Woman If You Need To Escape For A Moment Today Listen To This... 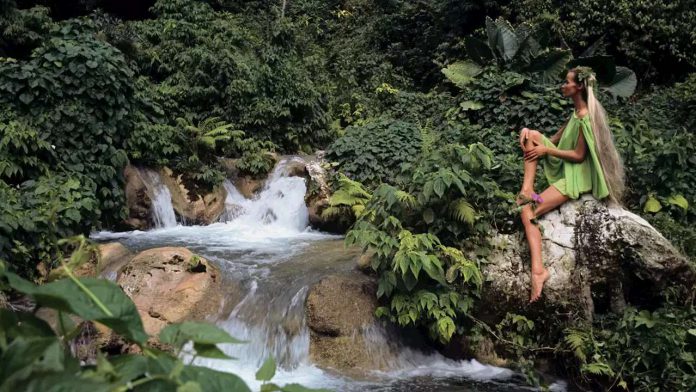 “I wanted to capture the feeling of hope and prayer,” says Waller-Bridge, who also composed the music for the house’s spring/summer 2020 show

Pinterest
The world right now can be a deeply overwhelming place – which is why it’s more important than ever to take a few moments to commune with nature and just… be. Helping to make that moment a little more soothing? Isobel Waller-Bridge’s newly released instrumental score,
Suspended In Air
, and accompanying playlist for Alexander McQueen – part of the brand’s #McQueenMusic initiative.
“I wanted to capture the feeling of hope and prayer,” says Waller-Bridge of her original composition. “Peace and nature have been important to my work over the last few months, and it felt natural to reflect on these themes. The middle section of the piece, where the energy picks up, is where I feel the style of McQueen most. There’s a strength and beauty in their work, which I hope can also be felt in the music.”
Just as brilliant? The calming accompanying playlist. “ I look around and I feel the need for community now more than ever,” Waller-Bridge continues. “Community is a word so deeply associated with McQueen, and I wanted to reflect that connectivity with diversity and energy. That doesn’t always mean songs in a major key, but rather two hours of excellent music to listen to while walking, running, staring at the sky, and thinking of each other.”
Read on for Waller-Bridge’s favourite tracks from her McQueen playlist.
Read More
Dr Jane Goodall Issues A Stark Warning: Humanity Is Finished If It Fails To Adapt After Covid-19
By
Susan Devaney
“Illusions Of Time” by Daniel Avery
“The unfolding harmonies set against the minimalist keys part is so calming.

I also really sink into the sound design that forms the textural bed for this track.”
“Unrest” by Shards
“I absolutely love Shards. This track is created totally by wordless vocal rhythmic techniques and close harmonies. I find it really hypnotic.”
“When I Grow Up” by Yaeji
“This track has got such swag. The way the vocal line is so completely intertwined with the rhythm of the electronics gives it a great punctuation throughout. It’s got a groove that I find really addictive.”
“Incantation” by Moses Sumney
“Sumney is such an interesting artist. I hear his music as occupying the space somewhere between classical and soul, but it’s impossible really to categorise, and it shouldn’t be! In this track, the soulful vocal harmonies against the harp remind me of a hymn. The title points us towards a magical folklore spell intention, and I feel that through and through.”
“Miami” by Cate Le Bon
“This track is taken from Cate’s Mercury-nominated album,
Reward
. It has a soothing quality to it, with minimalist electronics unpinning horns and other acoustic instruments. There is a sense of wonder to this track, supported by the chanting of “Miami” not so much as a declaration but as a prayer. Cate’s voice shares qualities similar to Nico or even Joni Mitchell perhaps – there’s an intimacy to the recordings, which bring me right into her world.”
Read More
“What Would We Be Like If Racism Never Existed?”: Zadie Smith On The Joyful “African Utopias” Created By Artist Toyin Ojih Odutola
By

Jason Derulo Transforms Into Spider-Man During 39 Wipe It Down 39...

Contact Tracing Could Be Key To Easing Social Distancing Rules