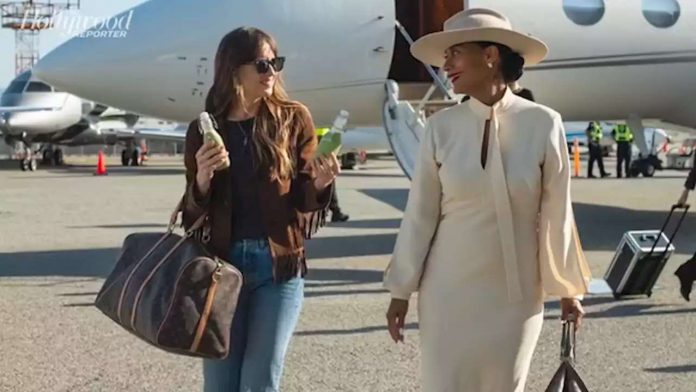 Ross notes this movie isn’t about her mother Diana Ross, while Johnson says she did turn to a famous friend to help craft her on-screen persona.

The High Note
, now available on premium VOD, sees Tracee Ellis Ross star as fictional diva Gracie Davis alongside Dakota Johnson as her assistant, Maggie. The pair sat down with
The Hollywood Reporter
remotely to discuss where they turned for inspiration and why viewers will love their movie.
Despite being the daughter of legendary recording artist Diana Ross, the feature film directed by Nisha Ganatra (
Late Night
) marks the first time Tracee has ever released music with the movie’s track “Love Myself.” Following a successful television career starring in shows like ABC’s current hit comedy
black-ish
and
Girlfriends
, the actress revealed why now was the perfect time to finally let her singing voice be heard.
“This part, this role, this movie, this story was special enough that it would lead me through my fears to the other side to a little bit of freedom,” said Ross. “It was a story that I felt really strongly about telling. This script came along and I chased it. I wanted it so badly and I’m so glad it happened.”
Considering Ross plays a superstar singer in the movie, it’s easy to draw comparisons from her character to her mother Diana, but Tracee says this movie isn’t about her mom.

“I know people are asking and people want to know, ‘Did you take inspiration from your mother, is this a role that is an ode to your mother?'” said Tracee. “It’s not. It had nothing to do with my mom. The script had nothing to do with my mom … It was wonderfully written. It was all on the page and there wasn’t far that I had to look [for inspiration]. So between our director and what was written, it was there.”
As for Johnson, who plays Davis’ assistant by day and an aspiring music producer by night, the actress turned to a famous friend for inspiration.
“I spent a lot of time with my friend Annie Clark who is a musician, she goes by St. Vincent,” said Johnson. “She has a studio in her house. And I basically just stole a lot of the things that she does.”
The duo also opened up about why viewers will love the movie.
“It’s really inspiring when you see a movie about people who work really hard and achieve their goals,” Johnson said. “And do some funny things along the way.”
“I hope that it brings people a little bit of joy,” added Tracee. “It’s a feel good movie. And the music is great.”
Watch the video above for more.

These Are the Best Ariana Grande Songs Don’t Fight Me