Home Woman Showmancing is the next new dating trend and you’ve probs been doing... 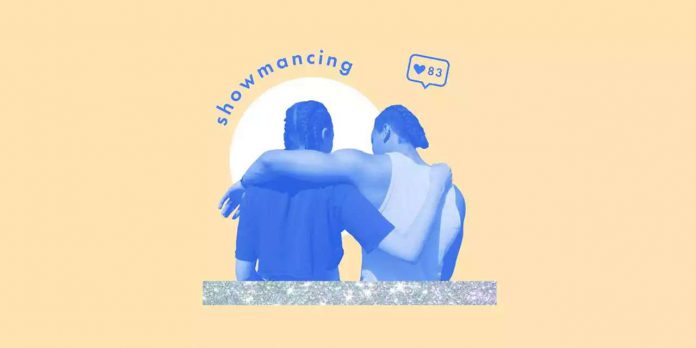 Hands up if you’ve done this?

Match
, Hayley Quinn.
When you throw lockdown into the mix,”How you’re spending your lockdown has become another way to compare ourselves, like saying, ‘my lockdown is better than yours,'” Hayley adds, and if a partner is included in that then it’s double the opportunity to show off.
You might also be after some social approval, or to not seem behind your peers, adds Marine.
So when is it time to stop?
Basically,”if you feel like your life together online is better than the real thing,” says Marine.”Part of being emotionally intimate is having private time between just the two of you,” adds Hayley.”Try to have at least one no-internet day a week where you can be more present, leave your phones at home to go for a walk or bike ride, or play a board game or puzzle.”
Richard Drury
Getty Images
How to react to showmancing
While we’re all tempted to showmance, if someone’s ‘perfect’ relationship is getting you down, remember that nobody’s relationship is as great as it looks on social media.
“Instagram pictures are often staged. In reality, relationships have ups and downs – but nobody posts about the negatives,” adds Hayley. So don’t compare your behind-the-scenes with somebody else’s highlights! However, remember that other people can do as they please on social media – so if you don’t want to see it you can mute or unfollow them.

Women on whether they showmance
“I want to show my girlfriend off,” says Ell, 19.”
“Personally, I post about my relationship on Instagram all the time, because I love my girlfriend and want to show her off and make her feel appreciated in every way I can – and social media is just another way to do that. However, I don’t post every single part of our relationship, as I also want us to have some privacy.”
Savana Ogburn / Refinery29 for Getty Images
Getty Images
“We have a private relationship,” says Melissa*, 21.
“I’m not a massive PDA (public displays of affection) person anyway, so when it comes to social media I don’t post any pictures of my boyfriend. We have more of a private relationship that I don’t think needs to be aired, and when we hang out it’s usually just the two of us anyway.”
“I want people to know what’s going on in my life,” says Jessie*, 23.
“I’m definitely guilty of trying to exaggerate a ‘relationship’ or a situationship on social media. Even if I’ve just been for a drink with a guy I’ll make sure to get his hand in a picture, just so people know there’s
something
going on- and I feel less ‘behind’ my friends too.”
*Names have been changed.