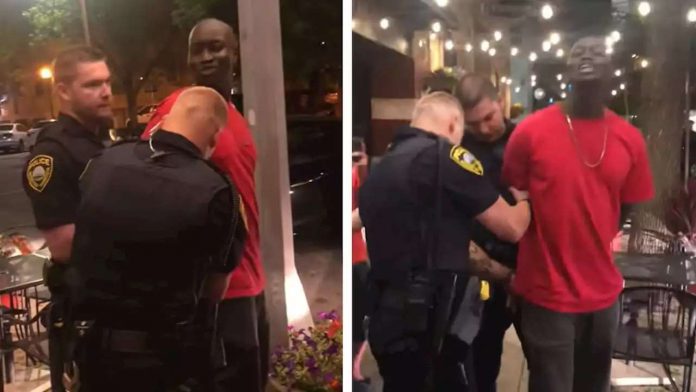 A year before the death of George Floyd, another black man found himself in the cuffs of white Minnesota police officers.

View Story
It’s only then the police decide to look at his wallet, and after an awkward pause, take the handcuffs straight back off.
The man never identifies himself as an FBI agent in the video, nor in his Instagram post; however the speed at which the cops removed the cuffs after seeing his ID seemed to lead many people online to believe the man was their undercover superior, and”FBI agent” was one of the top trending topics all day.
When the officer’s supervisor approached, the man then spent the next three minutes ridiculing the sheepish trio, unmolested.
“We’re allowed talk to someone,” the senior officer tries to explain.

And he made a mistake and once he figured out he unhandcuffed you.”
“So you guys can make a mistake and be like ‘oh whoops’… somebody could have got killed right now… until it happens that’s when you guys try to take some responsibility?” he ominously asks.
“Nobody got hurt,” the officer replies — a year before the arrest and subsequent death of George Floyd sent the country spiraling into more than a week of protests, and counting.
Got a story or a tip for us? Email TooFab editors at

Tara Reid thanks God for Jedward twins as they form an...

It’s legal in all 50 states to