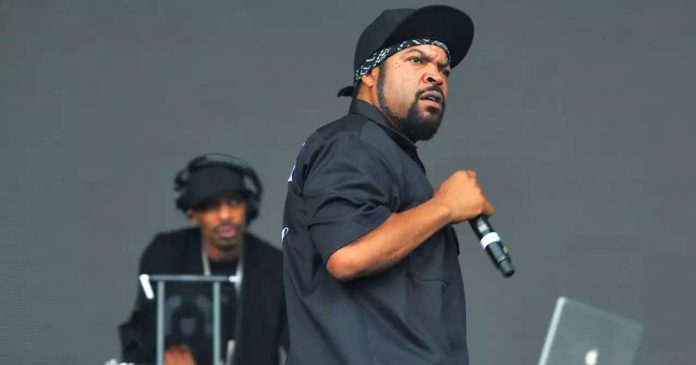 Ice Cube has posted an impassioned response to images of Black Lives Matter protesters toppling a statue of Edward Colston in Bristol.
The statue had been subject to a petition for its removal, which had been signed by 11,000 people, but some took it into their own hands on Sunday and brought the bronze tribute to the 17th century slave trader crashing to the floor.
The figure was then rolled through the city centre to the harbour, where it was unceremoniously dumped into the water.
Former NWA rapper Ice Cube, 50, was one of many to respond on social media as pictures of the symbolic gesture went worldwide, Bristol Live have reported.
The rap star, whose real name is O’Shea Jackson, tweeted to his 5.2 million followers: “THEY WILL ALL FALL.”
Ice Cube, who has been a major voice in the Black Lives Matter movement, shared a tweet from journalist Owen Jones.
Mr Jones tweeted: “Edward Colston was a leading figure in the transportation of an estimated 84,000 Africans, including children, as slaves. 19,000 died on the journey from West Africa to the Caribbean and the Americas.
“This is our history: now we have to face it.”
Showbiz editor’s picks Ice Cube also retweeted images of the statue being tipped into the water, along with the message: “One hood.”
The incident has divided opinion and Avon and Somerset police have launched an investigation into what they called an “act of criminal damage.”
Police chiefs were also quick to emphasise that the protest otherwise passed with no disorder and no arrests.
Mayor of Bristol, Marvin Rees, said in a statement: “I know the removal of the Colston statue will divide opinion, as the statue itself has done for many years. However it’s important to listen to those who found the statue to represent an affront to humanity.
“Let’s make the legacy of today about the future of our city, tackling racism and inequality.

I call on everyone to challenge racism and inequality in every corner of our city and wherever we see it.”
Speaking to the BBC, Home Secretary Priti Patel shared her horror at the images and called the bringing down of the statue “utterly disgraceful”.
She said: “That speaks to the acts of public disorder that actually have become a distraction from the cause people are actually protesting about.
“It is a completely unacceptable act. Sheer vandalism and disorder are completely unacceptable.
“It’s right that police follow up on that and make sure that justice is taken with those individuals responsible for such disorderly and lawless behaviour.”
Good Morning Britain presenter Piers Morgan soon hit out at her comments on Twitter, asking: “Does Priti Patel even know who Edward Colston was?
“He was a major slave trader involved in the transportation of 84,000 enslaved African men, women & young children, of whom 19,000 died on voyages from West Africa to the Caribbean & the Americas.
“Priti Patel thinks pulling down a slave trader’s statue ‘undermines’ racism protests. Have we ever had a more tone-deaf Home Secretary?”
Superintendent Andy Bennett said the demonstration was attended by an estimated 10,000 people.
He said: “The vast majority of those who came to voice their concerns about racial inequality and injustice did so peacefully and respectfully.”
Supt Bennett added: “However, there was a small group of people who clearly committed an act of criminal damage in pulling down a statue near Bristol Harbourside.
“An investigation will be carried out to identify those involved and we’re already collating footage of the incident.”
Do you have a story to sell? Get in touch with us at webcelebs@trinitymirror.com or call us direct 0207 29 33033.

20 Ways Meghan Markle Prince Harry Are Parenting Their Own Way

Celebrate Your Booty Gains With Leggings That Highlight Your Assets Er...