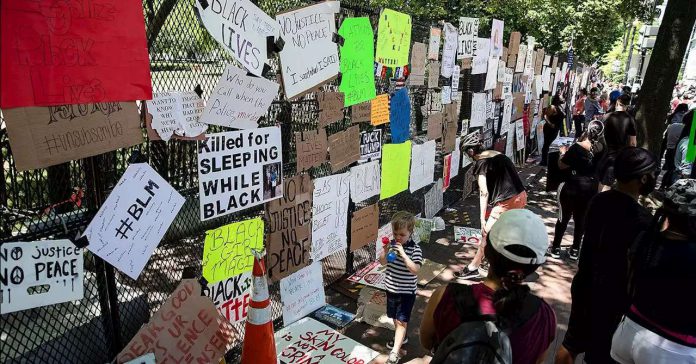 Print
Image zoom
People read signs left by protesters on the fence that is preventing them from getting into Lafayette Park across the street from the White House during protests on Sunday in Washington, D.C.
Samuel Corum/Getty
White House
barriers into a gallery of artwork championing the Black Lives Matter movement and other anti-racism and anti-brutality sentiments.
After the president’s home saw the installation of extra fencing around its perimeter last week, demonstrators used that as an opportunity to promote messages of reform and hope while speaking out about injustice and inequality.
Get push notifications with news, features and more.
+
Following
You’ll get the latest updates on this topic in your browser notifications.
Much of the large black fence has been being covered with colorful signs, posters and other works of art sparked by the killing of
George Floyd
on May 25.
Among the many posters are messages ranging from “Police Reform Now” to “No Justice No Peace” to “Say Their Names.” Other sentiments target President
Donald Trump
, with signs reading “Tyrant We Will Vote You Out” and “F— Trump.”
The president’s administration last week had peaceful protesters forcibly removed from near the White House so he and his aides could walk to a nearby church, drawing widespread controversy. The White House said the visit was intended to project resolve amid chaos.
The additional fencing was added on Thursday,
from the Secret Service explaining that “these closures are in an effort to maintain the necessary security measures surrounding the White House complex, while also allowing for peaceful demonstration.

Washington, D.C., Mayor Muriel Bowser criticized the fences
in a news conference
on Thursday.
“It’s a sad commentary that the house and its inhabitants have to be walled off,” Bowser said then. “I think that’s a sad commentary. We should want the White House opened up for people to be able to access it from all sides.”
RELATED:
All the Quiet, Beautiful Moments of Protest You Might Have Missed
Image zoom
Signs are shown hanging on a police fence at 16th and H streets, near the White House after days of protests.
Jacquelyn Martin/AP/Shutterstock
Bonnie Jo Mount/The Washington Post via Getty
Never miss a story — sign up for
to stay up-to-date on the best of what PEOPLE has to offer, from juicy celebrity news to compelling human interest stories
Last week, a
large street mural reading “Black Lives Matter” appeared
across two large city blocks that lead to the front of the White House.
The yellow capital letters stretch from sidewalk to sidewalk on 16 Street, between K and H streets, and were authorized by Bowser, the
Washington Post
reported. The mayor also renamed a section of the road “Black Lives Matter Plaza.”
“There was a dispute this week about whose street this is,” her chief of staff, John Falcicchio,
on Friday in a dig at the president. “Mayor Bowser wanted to make it abundantly clear that this is DC’s street and to honor demonstrators who [were] peacefully protesting on Monday evening.”
RELATED VIDEO: Couple Celebrates Their Wedding During Philadelphia Protest: ‘Very Empowering Moment,’ Bride Says
RELATED:

“Cities of Last Things ” an aw