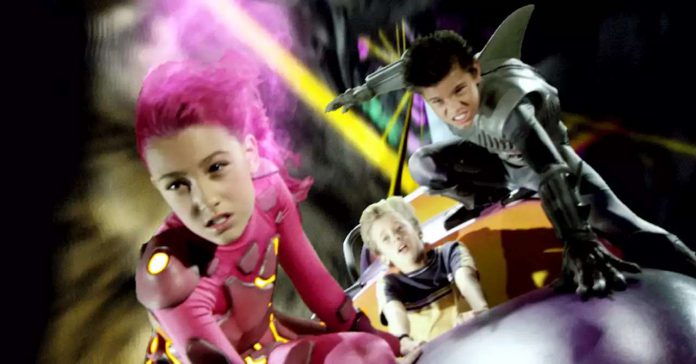 ‘The Adventures of Sharkboy and Lavagirl in 3-D’ writer and director Robert Rodriguez, son Racer whose stories inspired the movie, and cast members Taylor Dooley, George Lopez, and Cayden Boyd reveal never-before-told secrets from the movie.

George Lopez
and Taylor Dooley, as well as Robert and Racer Rodriguez, to indulge us in some of the best moments from the movie, revealing never-before-told secrets like Dooley’s on-set prank, playing HALO on set, and how they made Lopez’s head fit into his Mr. Electric suit.
Racer’s Big Idea
Back in December of 2003, Rodriguez had been asked by the studio that made the Spy Kids franchise (the now-defunct Dimension Films) to come up with a family-friendly movie that capitalized on the recent boom of 3D technology. One day while
Rodriguez and Racer were playing in their backyard pool in Austin, Texas,
the then 6-and-a-half-year-old had had enough of losing to his father in a game of fish vs. bloodthirsty shark and formed the team of shark and shark boy instead. Robert asked Racer for an idea about a female character who could join them, and Racer took a cue from another one of the games they liked to play: Lava (where the floor is lava and you “die” if you land on it). Soon, Racer started drawing out his ideas for the characters that would become the basis for the movie.
Robert Rodriguez (writer-director):
[Racer] came to me during the swim and said, “Hey, I don’t want to be fish anymore. How about you be the shark and I be shark boy?” I just finished the last of the
Spy Kids,
Spy Kids 3
. I was tired. I had done three [movies] in a row, there was one in the theater every year for three years. And I was still making adult films at the same time, so I wasn’t gonna make a movie for a while.
Racer Rodriguez (now age 23):
My only reference [for the drawings] was like the past
Spy Kids
movies, because my dad was telling me it’ll be like
Spy Kids 3D
with effects, and we could do all these crazy things with these cool characters.
Image zoom
Racer in the middle of”storyboarding” the movie as a 7-year-old.
Dimension Films
Rodriguez:
One of the drawings showed them going to another planet and on that planet was all of our favorite things. When the parents didn’t know, you would fly off and you would go into this planet that had your favorite burger place. There was Disneyland on that planet. All the greatest things kids want. So Racer said it’s called Planet Drool because it’s a place that makes you drool.
Bringing Sharkboy and Lavagirl to Life
The studio bought into Rodriguez’s new vision, despite the fact its think tank consisted of a boy who still was waiting for his adult teeth to come in. Racer started drawing his characters for fun. Then came casting, where two kids who had both moved from Michigan to start a career in Hollywood were discovered: Taylor Dooley and Taylor Lautner. George Lopez met Rodriguez at an Emmys party in 2004 and the director cameoed on an episode on
The George Lopez Show
, so it was fitting that the comedian return the favor.
George Lopez (Mr. Electric/Teacher Mr. Electricidad):
I remember two weeks of looking into a camera that was maybe three inches from my face. Across the lens there was a blue piece of tape for Sharkboy and a pink piece of tape for Lavagirl. [Rodriguez] would be like, “No you’re looking into the middle of the tape, I need you to look at the inside left of the tape.” I had to wear a green screen shirt that was three sizes too small, too.
Image zoom
Racer’s first drawings of Mr. Electric
Dimension Films
The final version of Mr. Electric
Everett Collection
[Rodriguez] mentioned it a few times on set that [
Spy Kids
‘ Alexa PenaVega and I ] resembled each other which is a big reason why he wanted to change my hair to be pink on set. We filmed two whole weeks of me with brown hair and he came in and wanted to change it.
Rodriguez:
She ended up looking too much like Carmen Cortez from
Spy Kids
with the brown hair that people are gonna think it’s the same girl. I thought, gosh, once we finished the CG on her body, she’ll have a lot of glowing lava flow going through the cracks in her armor.

I just did a quick Photoshop. I painted her hair purple. And then I painted it pink. And I said, “Oh my God, that’s it.”
Cayden Boyd (Max):
On the off days and on the weekends when we weren’t shooting, we were going on little adventures in the park. You know, like getting into trouble here and there.
Dooley:
Taylor [Lautner] and I’s family became really close. We lived right down the street from each other and had no clue. Then we went to go film
Sharkboy.
We used to play “shark in the dark.” I think Taylor invented this game. We would turn off all the lights and he would mostly always be the shark. It’s basically tag in the dark.
Rodriguez:
Our studios are called Troublemakers studios, but around that time, we called it Babymaker Studios. They all had children and little babies. We had play areas and it was just super fun. Halo was big back then on Xbox, so we would we’d be playing on the set on the green screen.
That”Dream” Song
One of the most memorable moments from the movie comes when Max needs to dream for a getaway vehicle from the incoming Plug Hounds. The martial arts dance moves plus the 3D sparkle from Lautner’s hand wave have become the first thing many fans think of when looking back at Lautner’s early career (Lautner declined an interview for this article). A fan video online of the sequence has

Rodriguez:
Originally we’re going to have a bunch more like sea animals dancing with them, like beluga whales and sharks. I came up with a Danny Elfman-type song from
Spy Kids.
I played it for Racer recently. It feels like it’s from
Nightmare Before Christmas
, you know, it’s very much in that mold.
Racer:
That’s the scene that sticks out with people, that resonates with people the most to this day. Just how iconic that was for them. It’s pretty funny.
Boyd:
I remember “Close your eyes, shut your mouth” and “Dream, dream, dream.” Robert was probably like “keep your eyes closed.” I was probably peeking because that was a fun day on set.
The Kissing Pole Prank
Dooley’s first on-camera kiss came when she had to peck Lautner on the cheek toward the end of the movie. Dooley was politely teased about it throughout the shoot, and on shoot day, Rodriguez decided to give Dooley a false sigh of relief to ease the tension.
Dooley:
I was so nervous to kiss him on the cheek because, being 12, that’s a huge deal.
Rodriguez:
I do remember Taylor being nervous for her first kiss. So we said “Okay, here’s a green pole. Since we can’t put you [and Lautner] actually side by side because of the 3D effect, you actually have to kiss a pole very nicely.”
But that wasn’t the only prank on set.
Boyd:
I remember hearing about [the pole prank]. It’s crazy. Both of my parents and the majority of my family went to Texas A&M University, which is in Texas. Robert being a Texas fan, especially at that time when they’re in the same conference, he would show me a script with a drawn Longhorn sign or something. I remember the grips and the whole catering crew having a prank battle themselves.
Rodriguez:
We were shooting this at the same time as
Sin City.
I was making two movies at once. The kids would come in the day, and then the older actors would come in later. It was one that’s very dark and then very light. You need that balance. It’s like a family movie for families at all. It was really a fun shoot
Rodriguez added a special nugget for the EW readers: He has an upcoming Netflix film called
We Can Be Heroes
(release date TBD) in which Dooley returns as Lavagirl and has a daughter that’s half-shark.
Rodriguez:
[Dooley] looks incredible like she stepped into her own sequel as Lavagirl.  It’s a big movie. It’s a big cast. And it’s gonna be it’s super fun.
Related:

Why Hong Kong Is Extending Coronavirus Restrictions Even as Cases Dwindle...