Home Woman Rodrigo Alves jets home to Brazil after being torn from loved one... 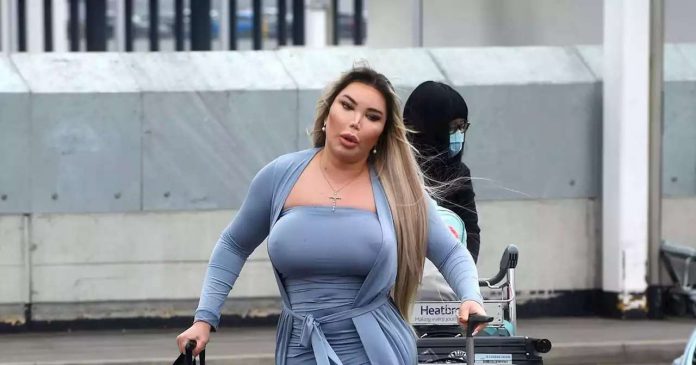 Roddy originally planned to flee to her home country during the pandemic but Rodrigo Alves got stuck at her London home as she was kept apart from her family 5,898 miles away

Rodrigo Alves got the first flight she could to Brazil to see her loved ones.
Roddy originally planned to flee to her home country during the pandemic but she got stuck at her London home as she was kept apart from her family 5,898 miles away.
The transgender reality star, 36, looked super chic in a very tight co-ord outfit as she strutted into Heathrow airport on Wednesday when she headed home.
Decked out in her stylish outfit, Roddy clutched her designer luggage as she arrived at the airport terminal for her flight.
The TV star let her blonde locks flow as she added an extra pop of wow to her look with some feathery slip heels.
Roddy has been keeping a low profile amid the pandemic sweeping the globe.
But the Celebrity Big Brother star revealed she has been itching to head back home to reunite with loved ones.
It comes as the government announced flying home was allowed as the country remains in lockdown.
This movement has now been considered in the essential travel category.
Although she owns pads in London and Marbella, Roddy still considers her native Brazil as her home.
In conversation with MailOnline, she previously said: “As soon as lockdown was rumoured to happen, I booked a flight to Brazil with my family, since here in London I have very few friends and nobody pretty much.

“I thought that being with my family at times like this would be appropriate, but then when I was ready to fly out from London to Rio de Janeiro my flight was cancelled and then I found myself stuck at home in London.”
She added: “I have been keeping myself, busy I have a vast closet from when I was a man and a third of the outfits I have already given to charity.”
Roddy rose to fame after spending over £500,000 on surgery – including Botox and liposuction – to dramatically change her looks.
The blonde beauty came out as a transgender woman in 2019.
Recently, she had £25 face surgery in her bid to become more feminine in her quest for perfection.
Showbiz editor’s picks After coming out as transgender at the beginning of February, Roddy had new breast implants put in.
She admitted she will continue to get surgical-enhancements in the near future.
Do you have a story to sell? Get in touch with us at webcelebs@trinitymirror.com or call us direct 0207 29 33033