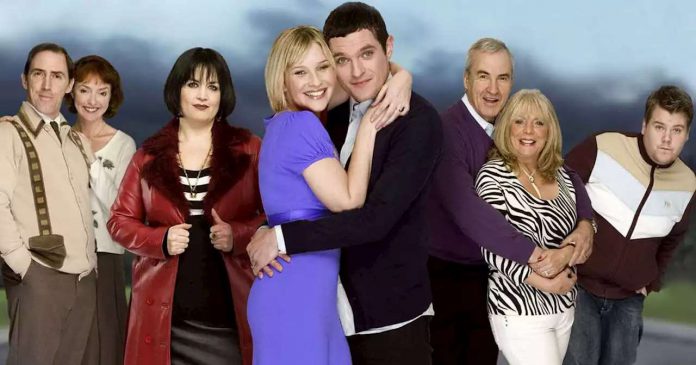 Gavin and Stacey was plunged into a race row.
In the wake of the Black Lives Matter movement, enraged viewers sparked an outcry over the characters “Chinese Alan” and “Seth the black fella”.
It’s been met with a mixed response on whether the TV show should be pulled from streaming sites.
Currently it’s available to watch on Netflix, Amazon Prime Video, YouTube and Google Play Movies & TV.
Among the crowd, one wrote: “With this whole cancel culture I hope @bbc now removes #gavinandstacey from @bbciplayer, @netflix @BritBox_UK.
“The show is misogynistic, racist, homophobic and guilty of fat shaming.”
This comes after Little Britain was pulled from streaming services Netflix, BBC and BritBox over the use of blackface.
Ant McPartlin and Dec Donnelly also apologised for dressing up as people from other cultures in now removed Saturday Night Takeaway episodes.
Now the spotlight has turned on Gavin and Stacey.

One fan wrote: “If we’re doing away with Little Britain can we also get rid of Gavin and Stacey?”
However, beloved fans of the show jumped to its defence.
A viewer added: “Gavin and stacey isn’t really offensive.”
Showbiz editor’s picks Gavin and Stacey returned to our screens at Christmas last year for the first time in 10 years.
The original cast reassembled for James Corden and Ruth Jones’ script to delight long-time fans.
It’s hotly-anticipated return wasn’t without controversial as a homophobic slur caused controversy at the time.
The writers defended their decision to include the foul-mouthed lyrics in characters Nessa and Bryn’s karaoke of the song Fairytale of New York.
Its lyrics were: “You scumbag, you maggot/ You cheap lousy f****t/ Happy Christmas, your arse/ I pray God it’s our last.”
Mirror Online has gone to James Corden and Ruth Jones’ representatives for further comment.

The Love Island contestants are subject to ‘unannounced drug testing’ in...