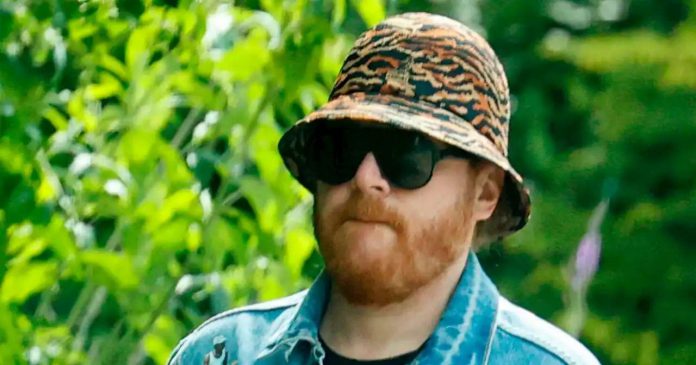 Television personality Leigh Francis has been spotted for the first time since his emotional public apology over offensive blackface stunts.
The 47-year-old comedian, who is also known as Keith Lemon, stepped out in North London days after apologising for the hurt had had caused over black celebrity impersonations.
In the pictures, Leigh looked downcast as he headed out for a walk in a large pair of shades and a print bucket hat.
He opted for a large print denim jacket and checkered cropped trousers, as well as trainers.
In a response to the growing Black Lives Matter movement, the stand-up comedian recently voiced a tearful apology about his noughties comedy show Bo’ Selecta!
Leigh spoke directly to the video camera and admitted that when he was making the show, he ‘didn’t think anything’ about impersonating black people.
In the clip he added: “I’ve been talking to some people and I didn’t realise how offensive it was back then and I just want to apologise.

“I want to say sorry for any upset I caused whether I was Michael Jackson, Craig David or Trisha Goddard… all people who I am a big fan of.
“I guess we’re all on a learning journey.”
During the show, that ran between 2002 and 2004 on Channel 4, Leigh dressed up as a string of famous people but faced criticism over wearing blackface.
Among the stars that have called Leigh out were Craig David, Trisha Goddard and Mel B.
Showbiz editor’s picks According to The Sun, Trisha has since accepted a private apology from the television comedian over his offensive impersonations.
Since the show was brought into focus last week, Channel 4 bosses appear to have removed all the Bo’ Selecta! episodes that were available on their website.
Do you have a story to sell? Get in touch with us at webcelebs@trinitymirror.com or call us direct 0207 29 33033