Home Woman Kelly Clarkson and Brandon Blackstock – all the signs their marriage was... 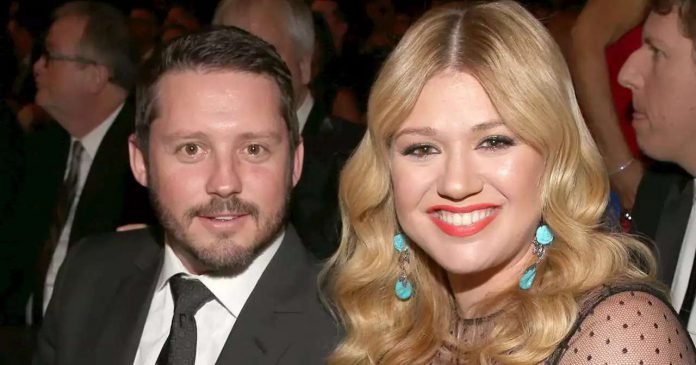 Kelly Clarkson has filed for divorce from Brandon Blackstock after nearly seven years.
The Since You’ve Been Gone singer, 38, filed official documents ending their marriage in Los Angeles last week.
Kelly and Brandon, 43, tied the knot in 2013 and share two children together – daughter River, five, and four-year-old son Remington.
Sparks were flying when they first laid eyes on each other at the Super Bowl XLVI in 2012.
Kelly was re-introduced to her manager Narvel Blackstock’s son after he got a divorce.
“Brandon is my manager’s son. I’ve known him for six years, but he was married for most of that time,” she told The Daily Mail at the time.
“Then, suddenly, there he was at the Super Bowl and he was single…”.
Despite their whirlwind romance, there have been some tell-tale indications the couple’s relationship has been in trouble over the past few months.
Here, we take a look at all the signs Kelly and Brandon’s marriage was doomed.
No social media posts According to the court documents, Kelly filed to end her marriage on June 4.
But the last time the couple were seen together on social media was more than three months ago.
The Because of You hit-maker shared a loved-up snap of herself and her hubby back in March.
The pair snuggled up to one another during a cosy moment in lockdown where Kelly can be seen with a huge grin across her face.
“Quarantine hair don’t care,” she wrote alongside a candid snapshot.
In recent weeks, it’s become clear that Kelly has unfollowed Brandon on Instagram.
Despite this, the producer hasn’t yet followed suit bu choosing to unfollow his now ex-wife.
Homes on the market Kelly has recently put the family’s home on the market.
The singer listed the sprawling LA mansion on the market for $9,995,000.
She complained her the lavish property was left freezing when the pipes packed up in March.
This meant Kelly and her children were forced to out of it. They were left stranded as the coronavirus pandemic meaning she couldn’t reach a plumber.
She tweeted: “So our plumbing froze up at our little cabin in Montana and, no joke, I just used my toddler’s potty.
“And just like that I have no pride or shame! Each day brings something I thought I’d never do hahahaha.

Back in December of 2019, Kelly also listed her Hendersonville, Tennessee, estate for nearly $7.5 million.
Disagreements about more children In May, Kelly admitted she and Brandon were having continuous disagreements about expanding their family.
During an interview with Gordon Ramsay on the Kelly Clarkson Show, the hit-maker revealed she desperately wanted another child.
Sadly, Brandon didn’t feel the same way due to the fact along with the children he shares with Kelly, he also has two more kids from a previous relationship.
Kelly explained in the Zoom interview: “I so want another child, and my husband is like, ‘No! We have four!”
Kelly spent her birthday alone this year Kelly decided in April she wanted to ring in her 38th birthday all alone.
Despite her doting children and husband wanting nothing more than to spoil their mother and wife, the singer insisted she needed some alone time to reflect on her life.
The singer explained her unusual decision during an appearance on Late Night With Seth Meyers.
She explained: “I literally looked at my husband, ‘cause it was a rough week of work and non-stop everything, and I said, ‘I don’t want to cook one damn meal.
“I don’t want to clean one article of clothing. I don’t want to do anything. If my children were to come in and hug me, that’s fine and then they leave.
She continued: “So, on my birthday, I literally asked to be left alone, which is funny since we’re all in isolation. But I am not in isolation. I’m constantly surrounded by people. So, I was alone and I enjoyed it and I did nothing but eat stuff”.
Too much responsibility In a recent interview on The Today Show, Kelly hinted she was handling all the responsibility at home.
The singer has been incredibly open about how difficult quarantine has been for her over the past number of weeks.
Showbiz editor’s picks She insisted trying to juggle being a present mother, caring for her children while working has been a struggle.
She added: “In all seriousness, it is funny with the kids and it is hard doing the teaching and all those kinds of things.
“It can be depressing, this kind of isolation. It can be a little dark for everyone and there’s a lot of uncertainty.”

Why Are Restaurants so Damn Loud?

Get all the details from the f