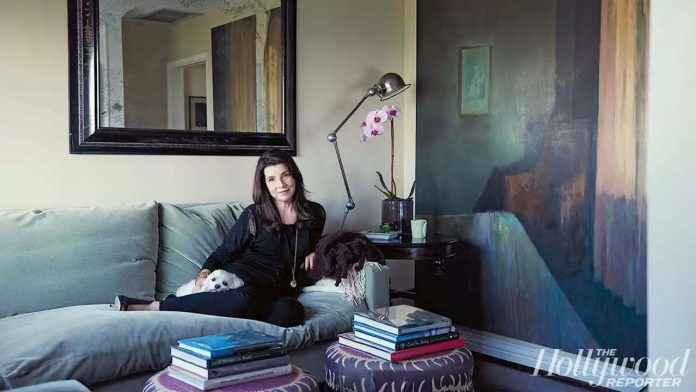 She spent 30 years building a career with A-list clients like Renée Zellweger before revealing her ALS diagnosis in 2014. Ever since, she relied on her skills and a committed group of Team Nanci fundraisers to search for a cure.

, winning for the last one.
Zellweger picked up her second Academy Award this year for
Judy
while working with publicists Nicole Perna and Dominique Appel, both of whom rose through the BWR ranks; Perna was Ryder’s mentee and onetime assistant.
Zellweger leaned on Ryder and returned the favor in 2000 when the publicist was sidelined with life-threatening breast cancer. She beat it in a year and went into remission with the help of UCLA’s Dennis Slamon (who developed the revolutionary breast cancer drug Herceptin), but not before losing her hair and stepping up from behind the scenes — her preferred standing as a publicist — to raise awareness and funds. “Cancer was a breeze,” Ryder told
THR
of that fight. “A breeze! ‘You have this disease. This is the treatment. Bye.’ ”
At “An Unforgettable Evening” fundraiser in February, Zellweger, while receiving the night’s highest honor from the Women’s Cancer Research Fund, opened up about that time in Ryder’s life, recalling how she watched her reluctantly step into the spotlight at the Fire and Ice Ball. “Despite being a seemingly extroverted, vivacious publicist, Nanci shuddered at the thought of public attention and would literally run from having her picture taken,” the actress recalled. “Most of the photographs that I have are of Nanci’s hands holding up a magazine or a handbag to cover her face. But when Ryder received an invitation to attend the ball, she accepted and asked her client to come along.
“So, we agreed to meet at her house and drive together. When I arrived, Nanci was struggling with anxiety to make a beautiful new security-blanket wig for the occasion sit straight on her bald head. She was upset and tugging away, and in her signature Long Island drawl complained that she hated the wig and her dress wouldn’t fit because she was puffy from chemo and because she couldn’t stop eating cookies.”
Just then, Ryder grabbed the wig and threw it across the room and said, “Let’s go,” and away they went. “With the effects of her chemo apparent for all to see, she leapt anyway,” Zellweger said. “The seemingly smallest moments of defying fear reverberate, and what results can change lives and our history.”
No one could have predicted that 14 years later, Ryder would have to make that decision once again when she received the devastating news of an ALS diagnosis, a moment that came in August 2014 after eight months of experiencing puzzling symptoms like slow and slurred speech. She made the difficult move to step down from BWR and deal with her day-to-day health challenges while, at the same time, agreeing again to put on a brave face for all to see. But that time, she shared her story by sitting down with
THR
for her first interview and photo shoot of any kind. It would be the first of many as she discovered the second chapter of her life’s work.
“They haven’t told me that I’m terminal, but the disease is. Eventually,” she said in October 2014. “Look, there is Stephen Hawking, and I hear stories about people who have had it for 10 years. You don’t know. But if you look it up on the internet, it says ‘progressive and terminal.’ So you fight. That’s it.”
Ryder received a diagnosis of bulbar onset motor neuron disease, a prognosis that carried a life expectancy of two to five years, and at the time she benefited from the boost of the viral phenomenon known as the Ice Bucket Challenge, which saw participants dump cold water on themselves as a way to raise awareness and funds for ALS. Zellweger, Cox, Witherspoon and Jeffrey Katzenberg were among those who participated on Ryder’s behalf as the global effort eventually raised $115 million for the ALS Association.
A year after the first interview,
THR
checked back in
with Ryder, who by that point had lost her voice and the ability to swallow and was using a gastrostomy feeding tube connected to her stomach. “I’ve met my match,” she said, communicating using a Boogie Board LCD tablet. “It’s real. That makes me sad. When I cry, it’s about the dilemma: Do I live like I am ‘living’ or ‘dying’? I don’t want to delude myself, so I can’t think it’s not possible I could die from ALS.

But I can’t live every day thinking, ‘I am dying.’ So a few times I have emailed my friends: ‘I don’t have ALS anymore.’ That’s when I need a break from being ill. My friends put up with a lot of my nonsense. I have great friends.”
It wasn’t really nonsense to those who knew her well. Cox told
THR
that Ryder was her hero. “She’s no bullshit. She tells it like it is,” she said. “She’s funny and really smart. I love people who are true to themselves. When it comes to the big stuff, that’s when Nanci really kicks it in. … As new things hit her, like losing the ability to write or to walk, she keeps moving ahead and makes adjustments. I’m in awe of her.”
ALS Association Golden West Chapter president and CEO Fred Fisher told
THR
that Ryder had a significant impact on awareness. “She turned her own personal challenges into an opportunity to inspire support for the thousands and thousands of families facing this devastating disease and to advance the search for effective treatments and cures for ALS,” he said. “Her dedication taught all of us how to confront obstacles and keep our eyes firmly focused on making the world a better place. It was a privilege to know her.”
His organization honored Ryder with a Heroes Award in 2016, one of many distinctions she received in recent years. Others included a special tribute at
THR’s
Women in Entertainment breakfast in 2015 and the Presidents Award from the International Cinematographers Guild’s Publicists Awards luncheon in 2017. That ICG distinction meant a lot to her as it was presented by Zellweger, who read Ryder’s speech.
“This award means the world to me,” Ryder wrote. “Believe me, the irony is not lost that I am a publicist who made a career out of communicating and I am now receiving the biggest award of my career at a time in my life where I’ve lost the ability to speak. I say ‘irony’ as to not use another four-letter word. This situation is something I never saw coming, but in a way it’s fitting to sit here now because I never sought out the spotlight and I’ve never been comfortable onstage. I love being behind the scenes, and it’s only been these past couple of years since being diagnosed with ALS that I’ve had a choice to put my reservations aside and do what’s needed to raise money for this disease.”
Survivors include a step-brother, Stanley Schwartz, of Arizona. In lieu of flowers, Team Nanci requests that donations be made to the ALS Association Golden West Chapter at
TeamNanci.org
in the hope that Ryder’s longtime goal of $1 million can be met. Meanwhile, a celebration of life ceremony will be held once social-gathering restrictions have been eased amid the COVID-19 pandemic.
During several Walk to Defeat ALS events, Lourd described how fundraising for a cure became Ryder’s ultimate mission in life and why she was so good at it. “We all marvel at the inner strength she’s found,” he explained. “She’s impossible to deny. She won’t let people look the other way.”
In addition to public appearances — her final one being the ALS walk in November — Ryder filled her final years with activities that brought her joy: spending time with Team Nanci members like the Maffeis, Kiriazis and Lourd, taking frequent trips to the zoo, bird-watching in her backyard with Jerome and Jerald, keeping up with her soaps and staying up-to-date on the news on CNN, even if the recent state of politics made her skin boil, she once joked to
THR
. One memorable moment was a visit to a local fire station to meet firefighters and their dog while posing for pictures on a fire engine.
Though she learned to love the everyday aspects of a normal life outside the buzz of Hollywood, even after she stepped down from BWR into her new reality living with ALS, Ryder was never able to remove her publicist’s hat. She often ended interviews with
THR
trying to control the narrative and push the focus away from the darkness of ALS.
“The story should be about being grateful,” she said. “I’m grateful. It could be worse. I’ve had a great life.”

Cupboard love my biggest romances always begin in the kitchen

Harvey Weinstein’s Former Assistant Breaks Her NDA for an Interview