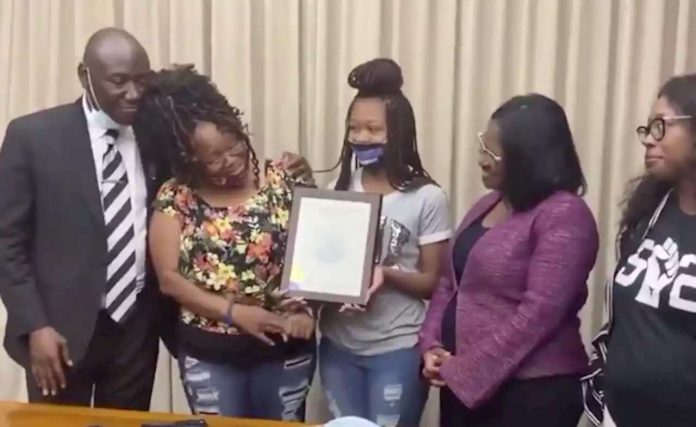 Last night, the Louisville Metro City Council voted unanimously to ban no-knock warrants, the type of warrant that was used when Breonna Taylor was murdered by the Louisville Police Department. The legislation will be titled Breonna’s Law in her honor.

Last night, the Louisville Metro City Council voted unanimously to ban no-knock warrants, the type of warrant that was used when Breonna Taylor was killed by the Louisville Police Department. The legislation, which comes just a few days after what would have been Taylor’s 27th birthday on June 5, will be titled Breonna’s Law in her honor.
Bre, this is for you! 🙏🏾 #BreonnasLaw not only BANS no-knock warrants in Louisville, but also requires the use of body cameras by anyone executing a search warrant. Thank you all for your support in advocating for justice!! Let this be part of #BreonnaTaylor’s legacy. #SayHerName pic.twitter.com/yBozQ6QJBM
— Ben Crump (@AttorneyCrump) June 12, 2020 On March 13, 2020, officers from the Louisville Metro Police Department broke into Breonna Taylor’s home in the middle of the night with a no-knock warrant and without announcing that they were law enforcement. Believing it was a home invasion, Taylor’s boyfriend, Kenneth Walker, reached for a gun in defense and the police officers shot the 26-year-old Breonna Taylor multiple times, she later died of her injuries.
After the murder of George Floyd on May 25 and the protests that followed, Breonna Taylor’s death became further highlighted in mainstream news. Breonna’s Law is one of the first steps to seeing justice served: not only does the law ban no-knock warrants, but it requires police officers to wear body cameras when serving warrants, turning those body cameras on five minutes before any action is taken.
“I know if Breonna was here today she’d be looking down thinking ‘ahhh, I’m making history,’” Taylor’s mother, Tamkia Palmer stated. “She just really cared about saving lives so she’ll get to continue to do that through the Breonna’s Law.” Her mother was also sure to note, however, that this is simply a start.
View this post on Instagram                   BREONNA’S LAW has been passed banning no-knock warrants in Louisville. Here’s her mother Tamika Palmer holding #breonnaslaw and honestly I’m emotional. We STILL need to see the cops who killed her arrested, but this a start. #justiceforbreonnataylor
A post shared by Paper Magazine (@papermagazine) on Jun 12, 2020 at 7:35am PDT
While Breonna’s Law will save lives in the future, the cops who killed her have still not been arrested or charged. The three police officers responsible for her death have been placed on administrative reassignment, but there is no news on intentions to arrest the officers and take them to trial for her murder aside from the announcement that the FBI would reopen her case to investigation earlier this month.
Since Taylor’s case has been made more public on television and online, many women from the Louisville Metro area have come forward about one of the officers responsible for her murder, Brett Hankison.

At least two women with nearly identical stories have come forward to state that they had previously been sexually assaulted by Hankison. Clearly, Hankison and the other two officers need to be arrested immediately.
To ensure that #JusticeForBreonnaTaylor does not begin and end with Breonna’s Law, you can continue to call and email Louisville Mayor Greg Fischer, Special Prosecutor Daniel Cameron, and Kentucky Governor Andy Beshear as well as sign the petition and donate to various causes in her honor.
Greg Fischer:
(502)-574-2003
greg.fischer@louisvilleky.gov
Daniel Cameron:
(502)-696-5300
attorney.general@ag.ky.gov
Andy Beshear:
(502)-564-2611
View this post on Instagram                   In March, Breonna Taylor was murdered by police in her own home at night when officers conducted a raid at her house. They entered without knocking or identifying themselves as police. Breonna was a first responder and EMT who worked on the frontlines as an essential worker during the pandemic. This Friday, June 5, would have been her 27th birthday. “She loved to help people. She loved life and she was just figuring hers out,” said Tamika Palmer, Breonna’s mother. “She was just getting started.” Today, the Metro Council Committee cleared legislation to limit no-knock warrants — but we still have a long way to go. Take these actions to demand #JusticeForBre, and make sure to celebrate her birthday on social media by using the hashtag #SayHerName. #BreonnaTaylor #JusticeForBreonnaTaylor #blacklivesmatter illustration by @maddybrookesart
A post shared by BUST Magazine (@bust_magazine) on Jun 4, 2020 at 8:56am PDT
Image via Ben Crump on Twitter
MORE FROM BUST
Justice For Breonna Taylor: Understanding #SayHerName And Black Women’s Invisibility In Police Brutality
A Black Trans Woman Was Attacked, And Cis Women Need To Open Their Purses
The Black Girl Bill Of Rights Needs To Be Ratified
Hi! I’m Aliza, a Creative Writing BFA student and an intern here at BUST Magazine. When I’m not writing, reading or scrolling through TikTok for hours on end, you can probably find me consuming copious amounts of iced coffee or doing something witchy. Follow me on Twitter @alizapelto for writing shenanigans and memes.
Currently Streaming: Smooth by Santana ft. Rob Thomas of Matchbox 20. Always.
Tags: Breonna Taylor , Breonna’s Law , #JusticeForBreonnaTaylor , Black Likes Matter , #BLM , #JusticeForBre , Tamika Palmer , Louisville , Police Brutality