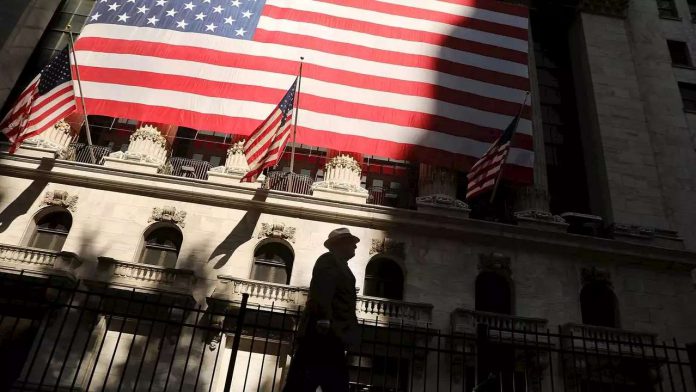 The companies that fund private equity—and where systemic risk is concentrated—are taking a huge hit, and putting the touch on their own shareholders. Does this mean trouble to come?

Email
Unlike the 2008 financial crisis, when the big Wall Street banks were all teetering on the edge of bankruptcy and most needed federal bailouts, this time around—we’re told repeatedly—Wall Street is just fine and the protections and regulations imposed on it by Congress and the Federal Reserve have proved effective. But financial risk doesn’t just disappear because it’s not being stored at JPMorgan Chase, Bank of America, or Goldman Sachs. So where has all the financial risk gone, if it’s not tucked away on the balance sheets of the big banks? (To be sure, some of it is still there: On April 14,
Jamie Dimon,
said
the bank set aside $6.8 billion for anticipated credit losses “given the likelihood of a fairly severe recession.”)
One place to look for this hidden financial risk is on the balance sheets of non-bank financial companies in the so-called shadow-banking system, many of which are fairly large and publicly traded but mostly unknown and unregulated. These companies—with names such as Ares Capital, Golub Capital, Bain Capital Specialty Finance, Oaktree Specialty Lending Corp., New Mountain Finance, and FS KKR Capital Corp., an affiliate of KKR, the private-equity powerhouse—are in the business of providing loans to small and medium-size companies, where their money is viewed less like a commodity and where, theoretically, they can earn a return in excess of their cost of capital. In the years after the 2008 financial crisis, with the Federal Reserve determined to push risk out of the Wall Street banks—to prevent a recurrence of what had just happened—these companies sprung up like dandelions in a suburban backyard.
Here come the lawnmowers. The economic consequences of the COVID-19 pandemic have been widespread of course, and few companies have been spared, save perhaps Amazon, Netflix, and an amazingly resilient Apple. It’s no surprise, then, that a large swath of pain is being felt by the companies that made it their business to buy loans originated by private-equity firms that buy companies and load them up with debt.
What’s becoming apparent in this financial crisis is that there are some companies, such as Boeing and ViacomCBS, that the Federal Reserve’s machinations have helped get fresh—and much-needed— capital from the financial markets that they otherwise would not have gotten. And there are other companies—many of which are much smaller—that can’t get access to capital from the public markets and are about to face the music caused by a shuttered economy. Many of these companies happen to be in the portfolios of private-equity firms—you know them well by this point, the Carlyles, KKRs, and TPGs of the world—meaning they were likely bought for a high price and have been loaded with debt—debt that is more often than not coming due and can’t be refinanced. Even though the Fed’s moves have helped both the debt and equity markets rebound smartly from their March lows, there are plenty of companies still struggling that the Fed can’t help.
One way to assess that struggle and get a sense of just how raw this economic crisis will be, once the full impact of it is known, is to look at the financial companies that provided the loans to the private-equity firms that bought a swath of small and medium-size businesses in the last decade, levered them to the hilt, and now have to deal with the consequences. In many ways the portfolios of the private-equity firms are the canaries in the coal mine of this crisis, in the way that mortgages were of the last one. It’s in this shadow-banking system that some strange things are happening.
Advertisement
Take, for instance, Golub Capital. In the decade that Golub Capital has been public, its stock has traded in a very narrow band of between $15 and $20 per share. That is until the third week of February, when the growing impact of the spreading coronavirus began to hit and the hidden risks on the balance sheets of LBO portfolio companies began to register with investors. Between February 21 and April 1, Golub Capital’s stock fell 50%. On April 1, the company announced that it was raising new equity capital, to shore up its balance sheet, through what is known as a “rights offering”—stock that is offered only to existing shareholders, often at a discount to the current trading price. The idea behind a rights offering is that existing shareholders, who already own stock in the company, are more likely to buy more stock in it as long as the stock being offered is sold at an attractive price, often below where the stock has been trading.

For shareholders, rights offerings have a whiff of an offer they can’t refuse. On the one hand, they are often terribly dilutive to the value of the shares they already hold—a lot more stock issued at a lower price than the current market price. But they also offer these shareholders a chance to protect the value of their investment by buying more stock at the lower price. Shareholders get to choose: get in deeper or lose more. They’re also, if not a sign of desperation, something of a last resort. They signal to the market that a company has few other viable choices for raising new equity but to tap its existing shareholders in a coercive way. That’s a red warning light for many investors and a clear indication of the trouble brewing for the portfolios of many private-equity firms and for the shadow banks that financed the buyouts.
In its report on the Golub Capital rights offering, Keefe, Bruyette & Woods, a highly respected investment bank focused on the financial sector, wrote that it was “surprised” by the Golub rights offering, which was equal to 25% of its outstanding shares. “This was surprising to us given their solid balance sheet and the timing is very early in the cycle,” the bank wrote. “If a top-tier manager is willing to do a dilutive rights offering, we believe this could potentially spark a wave of offerings as other [similar companies] look to follow their footsteps.” KBW wrote that it had considered Golub’s balance sheet to be “in pretty good shape” at the end of 2019 and one of the best managed of the shadow banks. “Which leaves us surprised, concerned, and a little confused,” it continued. “Generally, we view dilutive equity offerings as a sign of weakness but given the unprecedented economic uncertainty, this could ultimately be the correct decision longer term, depending on how the ‘sudden-stop’ economic downturn plays out.” Since the offering, which raised $3 billion of capital at $9.17 per share across five of Golub Capital’s funds, Golub’s stock has traded up about 20%, to around $11 per share but still well below where it was trading in February. It has a market capitalization of around $1.5 billion.
As KFW surmised correctly, other shadow banks also initiated rights offerings. In a March 30 letter to its shareholders, Bain Capital Specialty Finance, an affiliate of Bain Capital, the big private-equity firm once run by
Mitt Romney,
announced it, too, was doing a rights offering. Like Golub Capital, the Bain affiliate does a lot of business with private-equity firms. In fact, 95% of its loans come from private-equity deals involving 114 companies across 30 industries, with most of the loans in the technology, aerospace and defense, and health care and pharmaceutical industries.
Advertisement
In its announcement about the equity raise, Bain Capital Specialty Finance noted that, in March, it received “unprecedented” requests from its portfolio companies to draw down the revolving credit facilities that Bain had promised them. Bain said it met all of these requests and went back to its bank, JPMorgan Chase, to amend its own credit facility. (Yet another indication of just how interconnected the world of powerful financial institutions is.) The Bain rights offering will come at a 7.5% discount to a weighted average of the company’s stock price—like Golub, down about half since February. Research analyst
Christopher York,
at JMP Securities, wrote that he was surprised by the Bain offering too. “While we did not expect Bain Capital to seek new equity capital via rights offering, we braced investors’ expectations in [a previous report] for the growing likelihood for some to…look to shore up balance sheet and liquidity.”
Ares Capital Corporation, the largest player in the specialty-finance business by assets and market capitalization (at about $6 billion), is not doing a rights offering, at least not yet. (It did one in 2008 that surprised people then.) Like many other shadow-banking companies, Ares Capital is affiliated with Ares Management Corp., a private-equity firm started in Los Angeles more than 20 years ago by
Tony Ressler,