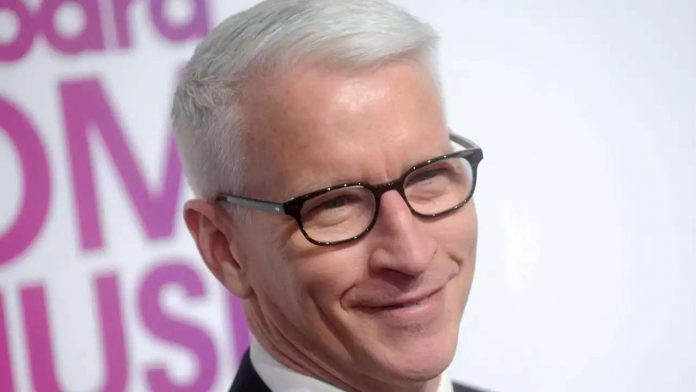 ‘If more people love my son and are in his life, I’m all for that,’ the CNN anchor told Howard Stern.

newborn son Wyatt Morgan
with his ex, Benjamin Maisani.
On Tuesday, Cooper explained his decision to involve his former partner in parenting duties during “The Howard Stern Show.”
“I don’t really have a family, and so my friends become my family,” Cooper said. “This is somebody I was involved with for 10 years. He’s a great guy.”
Cooper named his son Wyatt after his father, whom he lost when he was 10 years old. His mother, fashion designer and socialite Gloria Vanderbilt, died last year. Reflecting on his own upbringing, Cooper said he hoped to provide as much support as he could for his son.
“When I was a little kid, it was just my mom and my brother, but it was my mom. She was not the most parental person and I wish some adult after my dad died had stepped in and just been like, ‘You know what, I’ll take you to a ball game,’” he said.

“Or, ‘Let’s go out to lunch every now and then, and let’s just talk.’ You know, no one ever did that and so I thought, well if something happens to me or even if something doesn’t happen to me, if more people love my son and are in his life, I’m all for that.”
Cooper said he’s planning to have Wyatt call him “Dad” and “Daddy.” Maisani, who will be speaking to the baby in French, will go by “Papa.” Cooper also joked that he had no clue about what Maisani was saying to their child in French.
“He could be turning the kid against me, I don’t know,” Cooper said.
Watch his interview with Stern on SiriusXM below.
RELATED…

As Sundance Kicks Off the Specialty Film Biz Confronts an Uncertain...