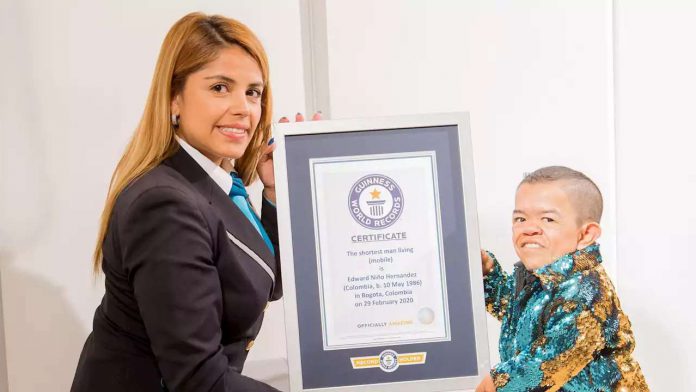 Edward Niño Hernández of Colombia was first declared the shortest mobile male in 2010, only to lose the title to two others.

But this isn’t the first world record rodeo for the 2-foot-
4.3938-inch resident of Bogota, who turned 34 on Sunday. Hernández
was
in April 2010, when
he measured in at 2 feet, 3.64 inches tall.
Later that year, Khagendra Thapa Magar of Nepal, who stood 2 feet, 2.41 inches tall became the new record holder. He later lost the title to a fellow Nepal citizen: 1-foot-9.5-inch
Chandra Bahadur Dangi.
Both of those men have since died so the title is now passed once again to Hernández.
Meanwhile, 1-foot-11.6-inch
of the Philippines remains the shortest non-mobile man.
Guinness World Records
Edward Niño Hernández is the world’s shortest man (mobile), according to Guinness World Records
Hernández received his second “shortest man” certificate at
a medical clinic in his home city before social distancing guidelines were implemented, according to a Guinness World Records release.

Although his short stature made him a world record holder, he said his big smile was his real secret weapon.
“
I use my smile to conquer the world! I always share my big smile with everyone; that’s my charm. I can achieve everything I propose to myself,” Hernández said in the release. “Everything is possible. … Size and height don’t matter! I want people to meet who I truly am: small in size, big in heart!
”

I’m a Trainer and This Is the Strengthening Exercise That Works...

How to beat pregnancy sleep problems in the third trimester