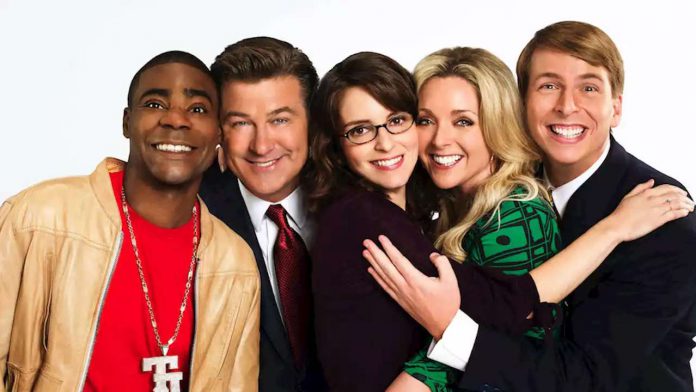 Even seven seasons and 138 episodes weren’t enough to leave fans of 30 Rock from not wanting more. Yet as these things go, most of us will have to make do by finding new shows like 30 Rock to enjoy instead. That’s a tall task—after all, there’s no beating the surefire duo of SNL alums Tiny Fey and Alec Baldwin. But at least we can still promise hilarious pairs and ensembles in the options below.
What ties these following TV comedies together is in no small part owed to Tina Fey’s brand of fast-witted comedy. Whether these series’ showrunners would care to admit it or not, 30 Rock had an indelible impact on comedy as we know it thanks to Fey’s keen ear for fast-paced jokes and unflinching satire. For more shows that took a nod from 30 Rock’s incessantly hilarious energy, check out the options below.
Unbreakable Kimmy Schmidt (3 Seasons) It’s only fair that we kick things off with another series helmed by Tina Fey. Unbreakable Kimmy Schmidt stars The Office’s Ellie Kemper as Kimmy, a woman who escapes a cult after being stuck in a bunker for years. She makes it to New York City to live alongside Titus, the ultimate gay diva—and their antics are as heartwarming as they are hilarious.
Stream ‘Unbreakable Kimmy Schmidt’ on… $8.99 buy it Veep (7 Seasons) For all the satire your heart can take, get a load of Julia Louis-Dreyfus starring as Vice President Meyer. Much like Fey’s character in 30 Rock, you already know Meyer’s going to be the woman putting out all the fires.

Stream ‘Veep’ on Hulu With HBO $26.98 buy it Difficult People (3 Seasons) Executive-produced by Amy Poehler, Difficult People is a Hulu hidden gem that’s as cringe-worthy as it is endearing. Billy Eichner and Julie Klausner star as a clueless couple trying to make ends meet in New York City, with no sense of how to navigate its social scene without getting themselves into a mess.
Stream ‘Difficult People’ on Hulu $9.99 buy it Strangers With Candy (3 Seasons) Think of Strangers With Candy as the grown-up version of Nickelodeon’s Special Delivery—an adult spoof on the after-school special. Amy Sedaris is a gem in this easy-to-binge series.
Stream ‘Strangers With Candy $14.49 buy it Happy Endings (3 Seasons) While Happy Endings didn’t get its own happy ending due to a premature cancelation, what this means for viewers is a quick weekend on the couch to meet its cast. Happy Endings features a raucous group of friends torn apart after The Couple of the crew—Dave and Alex—don’t get hitched as planned.
Stream ‘Happy Endings’ on Hulu $9.99 buy it

Our mission at STYLECASTER is to bring style to the people, and we only feature products we think you’ll love as much as we do. Please note that if you purchase something by clicking on a link within this story, we may receive a small commission of the sale and the retailer may receive certain auditable data for accounting purposes.

This Delicious Tex-Mex Salmon Bowl Packs More Than 50 Grams of...

9 cooling face masks to help you survive the heatwave