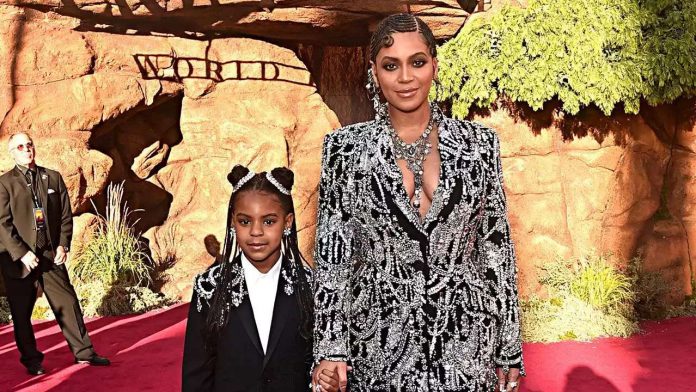 The 8-year-old daughter of Beyoncé and JAY-Z is nominated for the BET Her Award.

. Beyoncé’s”Brown Skin Girl,” featuring Blue, Wizkid and Saint Jhn, is nominated for the BET Her Award, which recognizes neo soul and traditional R&B artists.
The track, featured on Beyoncé’s
The Lion King: The Gift
album, is up against”Underdog” by Alicia Keys; “Melanin” by Ciara feat. Lupita Nyong’o, Ester Dean, City Girls & La La;”I Choose” by Layton Greene;”Tempo” by Lizzo feat. Missy Elliott; and”Afeni” by Rapsody feat. PJ Morton. Beyoncé is also nominated in three additional categories — Best Female R&B/Pop Artist, Album of the Year for
Homecoming: The Live Album
and Best Movie for
Homecoming.
As for Blue, she isn’t the only one who received a first-time BET nomination on Monday.

Saweetie, Doja Cat, Roddy Ricch and international artists like Rema and Sha Sha are just a few others celebrating, too. The awards show will simulcast on Sunday, June 28, at 8 p.m. ET/PT across ViacomCBS networks including BET, BET HER and CBS.
Last July, Beyonce’s mother,
Tina Knowles
, spoke with ET about what it was like hearing her granddaughter on an album at such a young age.
“Oh my god. That album is incredible,” she gushed.”I can’t get enough of it and, of course, I’m not biased but that was wonderful and for Blue to be a part of it, it’s amazing.”
Hear more in the video below.
RELATED CONTENT:

AMC Boards ‘Gangs of London’ After Cinemax Drops Out

Alanis Morissette Sings With Daughter Onyx On ‘The Tonight Show’