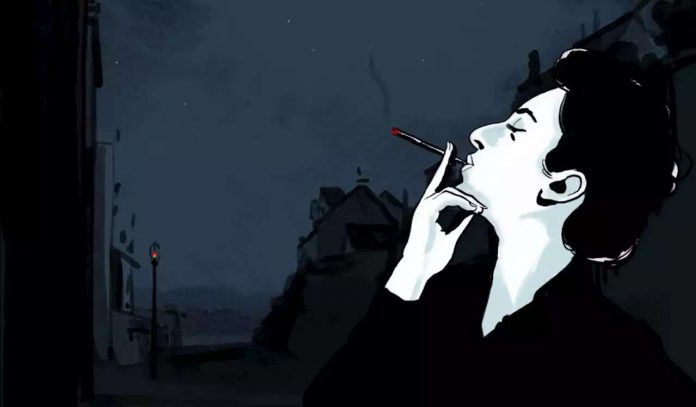 “The fluidity of ink, interspersed with these watercolor fragments of memories, gives you a sense of liquid metamorphoses, in which the animation imparts this fluctuating, feverish and constantly changing state,” she continues.
Eugene
Courtesy of 2P2L
The director, along with screenwriter Joëlle Oosterlinck, and producers Antoine Piwnik and Hélène Gendronneau, had previously tackled this story with 2017’s “The Man-Woman Case” – a short-form series for France Televisions that played to great acclaim in Annecy and across the festival circuit.
Caura calls this new film an “extension” of that prize-winning series, done with the hope to reach a wider audience. She notes: “This story resonates very clearly with what we’re seeing today, with questions of trans identity, tolerance, and the impact of a society on one’s personal life.

“Society seeks to sculpt in its image individuals who cannot exist as such, who must then struggle to be themselves and to live as they wish. While the series allowed us to tackle these subjects, its short format meant we couldn’t examine them in depth,” she adds.
“[The series focused on Eugene,] but there is also a world around him – the policeman giving chase, the femme fatale he meets, his late wife – and they all have a point of view, a role to play. Because this is the story about a private matter becoming a public scandal, it is very much the story of how perspectives change.”
Eugene

Logan Paul Says KSI Rematch Going Down in L A in...

17 Black-Owned Bookstores to Shop From Today and Every Day